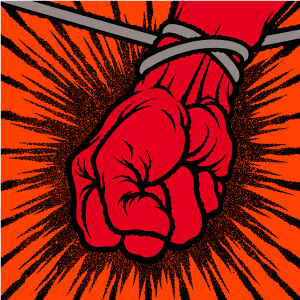 A sign you're making progress in life is when rejection doesn't destroy any (or most) of your self-confidence. I got that sign today when I learned a book proposal of mine was not accepted. And while it's disappointing I won't spend the next twelve months of my life committed to that proposed project, I certainly am not taking this like a torpedo hit my sailboat.

Given how internally I process things and how sensitive I am, it's really easy to take things personally. Before I realize what's happening, I'm playing the Victim card. Alas, that didn't happen today. Instead, it was a reminder of how sometimes things work out the way you thought they would, while other times, things work out in ways you never expected. (Sometimes those ways really suck and leave scars, but other times, they work out way better than you could ever imagine.)

I submitted a proposal for a short book defending Metallica's St. Anger, an album that has been the easy dog to kick whenever most fans talk about the band's catalog in person or online. I think the album is very important for the band's legacy, as it helped keep the band together when it almost permanently broke them apart. Master of Puppets and the Black Album are easy to praise based on their sonic merits and longing in the hearts of fans, but I wanted to go further and discuss why a reviled record was the band's most important record to date.

I don't know how else I could have written my multi-page proposal, and I'm not kicking myself, pondering how I could have made something that would have been accepted. (I should add that hundreds of other people submitted proposals on other albums, and hundreds of them got the same news I did today.)

I haven't abandoned my desire to defend said album, but for the time being, it will be relegated to blog posts, tweets, and Facebook comments. If ever there was another way or chance to get to speak my mind and say what I want to say (be it for an article, a book, or a documentary), I will not turn down the opportunity. Rejection doesn't mean you give up what you want to say; you just have to find another way of expressing it, even if it's like dropping a small pebble in an ocean. You don't cast that pebble for immediate approval. You cast it in hopes there are other people out there who don't think you're crazy and actually agree with you.

What's weird about facing rejection in the eye is this thought that you must have a thick skin. I don't know about you, but I wasn't born with a thick skin. It took me a long time to realize I should enjoy doing what I do, no matter how much people tore down my abilities. Whether it was playing and writing my own music or writing about matters I really cared about, I wasn't going to give up because somebody said I sucked. I don't have a choice: I have to pursue creative passions. If I don't, I wouldn't have much to offer this world.

Certain rejections in the past five years have led to major lulls in my life. Relationships broke up, friendships fell apart, job situations were not entirely stable or promising, and so on. None of those experiences were wastes of time as I believe I learned a lot from them, and most importantly, understood my role in why those didn't work out. I like to think I'm better for going through such grief, as friendships have been repaired, the job situation is more stable, and I'm comfortable with whatever happens next on the relationship front.

It can be easy to let a small rejection like a book proposal pass by when there are many other things on my plate right now. There are articles to write, podcasts and music to record, a novel to work on, concerts to see, sporting events to watch, movies to see, and friends and family to spend time with. I didn't put all of my emotional well-being into the acceptance or rejection of this book idea. I put everything I could into a proposal, but I tried to see a bigger picture of what I would do if it didn't get accepted.

Life can go in crazy directions, and rejection can be a gift. If you were ever tell me I'd be able to relate to Garth Brooks' "The Dance" and "Unanswered Prayers" (songs that I found incredibly corny and silly in my teens and twenties), I'd laugh you off. But I have a better understanding now of what the general messages are: if you don't try to do this, you won't be able to appreciate that. And just because things don't work out the way you wanted them to, that doesn't necessarily meant they're the wrong outcome. They're just what they are: experiences that help you get through the road of life.
Posted by Eric Grubbs at 11:25 PM No comments: