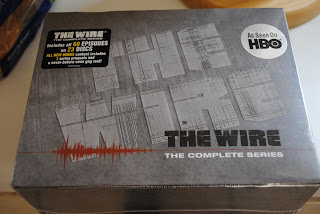 Last week, I decided to make a purchase that some could say was foolish, but others could see as smart. And I couldn't help being self-conscious about it: I bought The Wire on DVD.

There's a joke about being white and liking this HBO show that ran for five seasons. (Read probably the best explanation why right here.) Seems like everyone I know that has seen the show loves it, and will profess its greatness at any given moment. The day I purchased the set, I quipped on Facebook that I was "officially white."

I have yet to hear anyone say a negative thing about this show, but there was some hesitation when I considered buying the whole shebang. This show was on HBO, a network that has its tendency to have original programming where people you don't normally root for as protagonists. But since this show's on HBO and not network TV, you can't say anything bad about it, right?

Well, I still have burns from being a big fan of Six Feet Under before the show made me eventually hate all of the characters. And I still remember watching a handful of episodes of The Sopranos and realizing that mob stuff is not of great interest to me, even though I think The Godfather is great.

Then, there's this little factoid: as of this writing, I've never seen a full episode of The Wire.

You might think I'm the epitome of stupid by laying down some good money for a show I think I'll like. Since the price I paid for it was too good to pass up (a one-day-only Amazon deal that pulled the price down to only $73, while it normally runs for double that amount) I decided to take the risk. I decided, if I hated the show, I'd give the set to one of my friends who loves the show and leave a nasty note.

But I'm quite sure that won't happen.

What interests me about the show can be credited to my enjoyment of watching shows like The Killing and The Shield. I'm not the biggest fan of dramas with cops, robbers, and inner-city life, but with what I've lived around in a gentrified neighborhood (and worked around in the media), a look at how cops, criminals, political leaders, and journalists intertwine fascinates me.

And knowing that, I'm reminded of when I decided to pick up Scott Walker's In Five Easy Pieces box set back when money was tight, but Tower Records was closing and selling everything drastically cheap: sometimes you have take a small risk for a big reward. The key is sometimes because you don't to drop a lot of dough on stuff that has yet to fully prove itself to you. But, every once in a while, you have to go for it.