September 24, 2012
This past weekend was a long one -- longer than most weekends for me -- but I had fun. On Saturday, I reviewed the first Texas edition of Riot Fest for not only DC9, but also the Houston Press's blog, Rocks Off. My DC9 review is a little different than my review for Rocks Off because I wanted to give the perspective from a local and an out-of-towner, respectively.

Of course, it was hot, and I found Rise Against's set to be a long and painful way to end the evening, but I enjoyed the day. I certainly enjoyed the Gatorade when I got home.

Last night, I had the privilege of seeing Ben Folds Five and taking photos during the first three songs. My review is a basic rundown of the show, but I'd like to share some more that obviously didn't fit in the review.

When I walked up to the stage as the band came on, a rush of feelings came over me. I still remembered what it was like to drive around Kingwood in 1997 listening to my dubbed cassette copy of Whatever and Ever Amen in my '77 Pontiac Catalina. Now here I was in front and center, and the band kicked off with "Missing the War." I figured this was going to be only time I'd be this close to the band, so make the most of it. I snapped away, smiled from ear to ear, and sang along. Ben even noticed me and smiled. 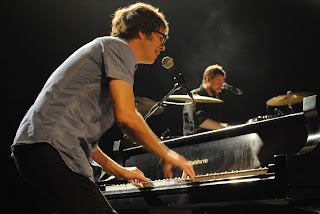 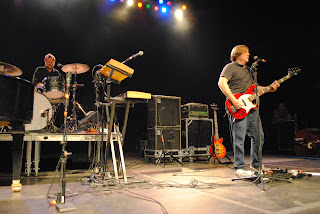 After "Jackson Cannery" finished, I went to the back of the floor level and stood in front of the mixing console. I could see the band pretty well, and I enjoyed the rest of the set.

As the show let out around 11, I faced the frustrating reality that is getting out of the Gilley's complex parking lot. It's always a beating, so I tried to make a phone call to my friend Trevor Kelley, hoping to thank him again for that Ben Folds Five reunion concert a few years ago. (He helped bring together that special show for MySpace where the band performed The Unauthorized Biography of Reinhold Messner in its entirety) When I got the "Your call has been forwarded to an automatic voice messaging service" message, I sighed and thought I'd wait out the traffic jam.

Striking up a conversation with a few guys and a girl in the parking lot, the talk led to interests in writing and music. Turns out, the girl has been a writer for a few years and her friend is into photography. Thinking I could talk to these fine folks for a few hours, Bryce Avary (aka, the Rocket Summer) walks by and hangs out with us. Sure was a pleasure to finally meet him after seeing him at shows over the years (and he remembered our interview back in June).

Seeing a small crowd near the tour bus, I suggested we see if the band was signing autographs or taking pictures. Well, this happened. 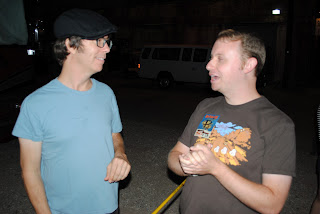 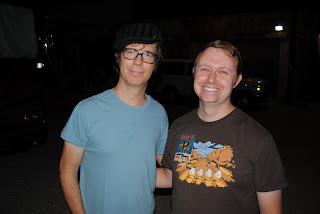 Never during all my years listening to Ben Folds' music would I ever think this could happen. This was truly one of the best concert experiences that I've had. Not only did I get to see Ben earlier in the year with the Fort Worth Symphony Orchestra, I got to see this.

I might not exactly know where my life is going in terms of job situation, but I was thrilled to let go and truly live in the moment. Glad I took pictures.