I Want Your Skulls 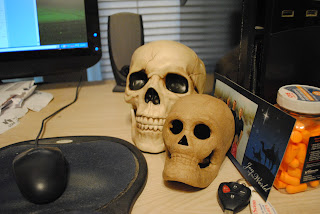 When it comes to decorating, there is usually only one time of the year that I do it.

And it's not Halloween.

What gives? I've always enjoyed Halloween as an adult and a kid. I'm always happy to see what my nieces will be each year, and I'm very eager to check out horror flicks I have not seen before. Giving out candy can be fun, but in the neighborhood I live in, it can take a lot out of me.

But for all my time out of my parents' house, the most I've done in terms of decorating was placing a plastic jack-o-lantern on the kitchen counter and filling it with candy. No skeletons, skulls, vampires, goblins, or ghouls.

In the last five years, I've had the pleasure to carve jack-o-lanterns with my friend Amy. Making a party of the event by adding caramel apples, this has been a wonderful get-together every time. This year, though, Amy is moving out of town, taking a great job in Houston, so there probably won't be a party. But I'm adamant that Matt, Jenny, and I carve some pumpkins before October 31st.

An idea I floated to Jenny was about Halloween decorations, and she was game. I don't want to go overboard and buy up a lot of expensive stuff, but if there was something we'd like to get while grocery shopping or clothes shopping, we should get it. Hence the picture above, with two different skulls saying "Hi" while I spend most of my day at the computer.

Couple that with two pumpkins (with a cord in the back each to to light them up) and a small skeleton that adorns Jenny's apartment, we have something brewing. Again, not to be overblown with decorations, the thought is to do something fun and macabre.

This will begin a new tradition, and we'll surely take advantage of those after Halloween sales on November 1st. This isn't the same as decorating for Christmas, but it's surely fun.