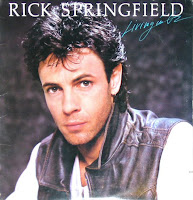 My introduction to Rick Springfield was not through General Hospital or hearing "Jessie's Girl" on the radio. It was Chipmunk Rock, an album mostly made of of cover songs with Alvin and the Chipmunks. While I can't really stomach Alvin, Simon, and Theodore's version of "Jessie's Girl" these days, there were roots laid in my mind. The same went with many of the other songs on the album, like "Take a Chance on Me," "Whip It," "Hit Me With Your Best Shot," and "Leader of the Pack." That's the kind of stuff I went on since we didn't have MTV in our household until 1987.

I've heard the original "Jessie's Girl" many, many times in my lifetime and I still enjoy it. Yet thinking there was anything more to Rick Springfield was not really on my mind until recently.

I had seen the Behind the Music episode on Rick a few times and I knew he had a very frank memoir out on in bookstores called Late, Late At Night. I thought of him as a pop star trying to retain his rocker image. This desire was not too far off from Rod Stewart, believe it or not. A song like "Don't Talk to Strangers" doesn't really rock, but I still like the chorus.

Leave it to Dave Grohl with showing me how much more Rick Springfield is as an artist. Yes, an artist.

In Grohl's documentary, Sound City, a number of other hits besides "Jessie's Girl" are featured. "I Get Excited," "I've Done Everything for You," and "Love is Alright Tonite" came to my attention, making me way more interested in Rick, beyond what I had heard before.

Giving a listen to the Essential Rick Springfield, I can't tell if Rick wants to be Sammy Hagar or David Cassidy. Maybe that's the thing that's plagued him for his entire career. When you're too good-looking to be a rocker but too rocking for a pop crowd, one end of the spectrum is gonna win over the other one, depending on the song.

I recently read Late, Late At Night and found it pretty open and honest. He makes no bones about his life-long battle with depression and sex addiction. Not exactly dinner-table conversation, but his songs make more sense to me after reading the book. Not many memoirs are this blunt.

I've already begun my hunt for my favorite LPs at the local record stores. I found Success Hasn't Spoiled Me Yet and I hope to see Working Class Dog soon. Those are two that I consider "essential" and his other records are not too tempting for me. Something clicked perfectly on those two records and I'd like to dig into the other non-single tracks.

Funny how this journey started with an Alvin and the Chipmunks cover. I hope to meet somebody someday who got into Modest Mouse because of Kidz Bop.

Ted said…
This comment has been removed by the author.
11:07 AM

Ted said…
That day is coming soon, my friend. Rick Springfield...I suppose I'm jaded by radio with this guy, because I can't hear his songs without thinking how he was seemingly everywhere on the air back in the '80s -- and I was playing most (if not all) of his hits. Time + Frequency = BURNOUT!
11:08 AM