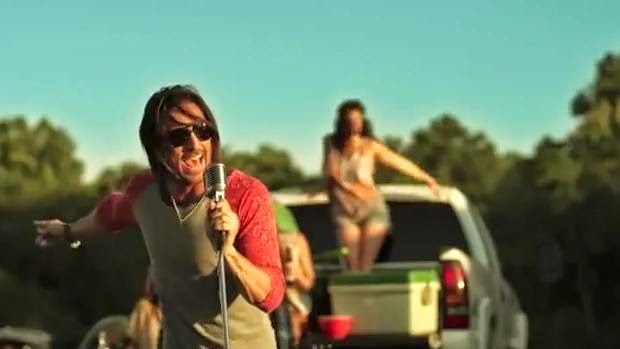 What happens when a trend in music reeks of terrible offenses to the audio and visual senses, yet is somehow still infectiously catchy? A trend in particular that's been on my mind lately is the one dubbed, "bro country."


This trend has been perfectly mocked on YouTube and the best talk radio station in the DFW area. Essentially, these days, if you're a male artist and want to have a massive hit on the country charts, the song lyrics must include references to the following:

The more references the artist has in the first 60 seconds of the song, the better chances of it becoming a hit. Don't believe me? Just watch the clock as a song gets going.

Musically, bro country is more like hard rock with flashes of hip-hop beats and flows, rounded out by acoustic guitars and banjos. Think more "We Will Rock You" and "Make 'Em Say Uhh" than "The Grand Tour."

Loaded into these cliches are melodies that can easily get stuck in your head. I freely admit they get stuck in my head like parasites. Songs like "This is How We Roll" by Florida Georgia Line and "Crash My Party" by Luke Bryan. When I first heard them, I wondered how they got by my usual tastes. Like I was a goalie with a pretty good save record wondering why there were pucks finding holes in my defense.

As someone who detested country music in my youth, I don't think I've fully embraced all the colors of country music. During periodic exposures to country music in my teens and twenties, I found the music to be irritating melodically. There was very little room for endearing melodies to my ears, which were more geared towards an extreme between the Carpenters to Metallica. With the country music I heard, I thought you could only dance around a small amount of vocal melodies while repeatedly strumming an open-G chord on a guitar. Not helping matters was the constant, slightly off-key, twang that made country music cun-tray.

What artists like Garth Brooks and Tim McGraw sang about didn't register with me in my teens or my early twenties. I didn't have friends in low places, didn't get the meaning of unanswered prayers, or going to some stupid dance.

I'd like to say my horizons broadened a little in my late twenties by not immediately scoffing at music I didn't regularly listen to. With country music, that enlightenment came from reporting traffic for a small market, "classic country" format and having a housemate who loved country from the 70s and 80s. Every now and then, I'd find a tune that was actually quite enjoyable. My drawbridge was occasionally coming down, thanks to these good people that I'm still close to.

During the past twelve months, I spent a lot of time around bro country songs. I worked in a few Walmarts as a merchandising rep for a marketing company, and I did traffic reports to various formats, including modern country. Talk about being near epicenters of bro country. You could not escape the exposure to bro country. For example, when Luke Bryan's Crash My Party came out, there was a short commercial for it, featuring the title track, running on a loop in every Walmart. Spending a few hours at a time per store, always working near the wall of TVs, I'd repeatedly hear, "If you wanna call me/call me/call me/You don't have to worry about it baby." By the end of the marketing campaign, I believe I heard that hook 500 times, easy.

All those times hearing said chorus hook, I didn't find the tune melodically odorous. The same would happen when I pre-recorded a traffic report for a country radio station. While the lyrics of "This is How We Roll" reflect nothing from my life, I couldn't but help sing along in a joking way. Eventually, I thought, "Hey, this isn't bad if you look past the lyrics."

Consider this eventual submission by the marketing/researching powers-that-be.

Bro country is like what hair metal was to hard rock music in the 80s. There's a look and sound designed for a mass, paying audience. There is no denying who the target demographic is for Florida Georgia Line or Luke Bryan: good ol' boys who were raised a certain way and act a certain way as adults. There's always church on Sunday, alcohol for the good times (and bad), a truck for work and play, and a girl to light up his life. The more specific the song plays into the stereotype, the better.

Is this scope narrow? Absolutely. It's pandering to an extreme. But it sells, and the music industry thrives on what sells. What our inner Statler and Waldorf criticism says about this scope doesn't really matter to the industry as long as it keeps selling. Nashville songwriters aren't going to stop writing songs like this because of satirical YouTube montages, think pieces, or radio bits. If there's money to be made in the music industry, you milk that cow until the cow's dead.

While I will defend certain tunes on Crash My Party like the title track, "Roller Coaster," "Have A Beer" and "Goodbye Girl" on their melodic merits -- which are more pop rock tunes more than anything else -- I am not a 100 percent supporter of Bryan and his bro country bros. There are a lot of awful songs with repugnant melodies and moronic lyrics. "That's My Kind of Night" is far more like Master P than George Jones. "Amarillo Sky" by Jason Aldean makes me wonder where the Nyquil is. Granger Smith's "Country Boy Love" makes me wonder where I can find some duct tape for my ears.

This is music for people who relate to the stereotypes. I am clearly not in the songwriters' minds as a member of the target audience. I didn't grow up around rural areas, riding around in a pickup truck blasting classic rock and traditional country. And I didn't eventually start bopping my head to hip-hop with a country hat on. That's the kind of guy I wouldn't believe I could have a deep conversation with. I don't go to church, I've never driven a truck, I've never wooed a girl to come to a creek in the moonlight, I don't drink a lot of beer, I haven't gone fishing in a few years, and I've never shot a gun other than a BB gun. Our family does have a farm, though.

You can't stop bro country and it doesn't look like it's going away soon. The music doesn't offend the men and women who buy the music, the concert tickets, and the T-shirts. All I can do as a listener is be OK if a melody is enjoyable no matter what the format. If I find the the music catchy but the lyrics to be the work of cynical, cash-hungry songwriters, well, that's the way it rolls.