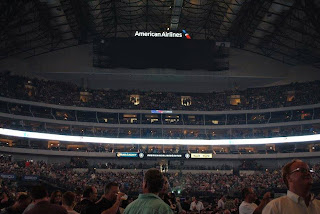 Leading up to last week's Rush show at the American Airlines Center, there was a bittersweet taste in my mouth. I had a sense I'd enjoy the show as a longtime fan of the band, and I hoped to review and photograph it for the Observer. (I was lucky enough to do that and had a great time.) Why it was bittersweet was how prior to the show, I couldn't stop thinking about my friend Evan, a longtime Rush fan who passed away unexpectedly last October.

I think about the guy a lot (not many days pass without thinking of him), and I wasn't sure how I could handle seeing one of his favorites without physically being with him. Obviously this was not appropriate to talk about in my review, as the average reader wants my review of the performance, setlist, crowd, and sound rather than a personal reflection. I was fine with supplying that for the Observer reader, but I wanted to share about the cathartic effect the show had on me.

As I waited for the show to begin, I was in front of the barrier along with photographers way more experienced than me with much more expensive equipment. I had the jitters and frequently paced around in a small circle. Still not quite in the acceptance stage of Evan's death, I wished that the guy was with me in the enormous arena. Strangely, after I thought that, I felt a calming feeling as I looked out into the crowd. Akin to the final scene in 24 Hour Party People, where Tony Wilson sees the spirit of his departed friend Ian Curtis, I could see Evan's enthusiasm for Rush reflected in the many intensely-focused members of the crowd. I told myself, "He would want you to be here and to have fun."

Maybe it was a voice from the afterlife or just a desire to hear a reassuring thought, but I was able to give the three-hour show a fair shake without having a tremendous shadow of grief hang over me. I was able to wrap my head around the vast catalog Rush has and take in what might be their final Dallas show. (Various factors are pointing towards this as the last large-scale tour for the Canadian trio.) 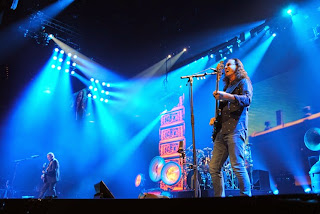 I came home and wrote my review and uploaded the best pics I took. Receiving positive feedback from friends and fans as well as my guest (Joel's father, who has been going to Rush shows since the mid-'70s), I was proud to represent what it's like to be a Rush fan in 2015. Knowing longtime fans helped shape me into being the fan I am now, and I'd be pretty clueless without them.

Fast-forward to today and I decided to set aside my evening to a Q&A/signing with the founding member and primary lyricist of Anthrax, Scott Ian. I wasn't so sure I wanted to go, thinking there would be a massive crowd and an interminable wait to get something signed. But a friend of mine that works for the bookstore hosting the event assured me that the wait would not be long, given how they do things with event passes.

During the lively Q&A, Scott answered questions about his role as a zombie in The Walking Dead to how he wrote his autobiography. I decided to raise my hand and ask a somewhat inside-baseball question about "Black Lodge," a song about a place in the Twin Peaks world. I asked what it was like to work with the show's musical composer, Angelo Badalamenti, on the song. And also, if he had any interest in the upcoming third season of the show. His answer was very enthusiastic as he had a great time working on "Black Lodge" with Badalamenti and he looks forward to the third season.

Thing was, after he answered my question, I thought about my high school friend Jeff, whom I dedicated When We Were the Kids to. Jeff was a gifted guitarist who could figure out almost any song by ear. The memory that came into my mind was when he showed me the opening riff to "Black Lodge" in my bedroom. I thought it was so cool that he figured out the riff, as well as the pedal/amp effect used in the song.

That memory is one of the handful of memories I have of him before a drug overdose took him away from us. I don't think about him much these days, but I will never forget him and what he meant to me, even though we weren't super-close friends. The guy loved music and he inspired me, as well as many others.

Once again, the bittersweetness came into me as I got to take a picture with Scott, got my book signed, and even won tickets to Anthrax's show. But like clockwork, the thought of "Go, have fun and live your life, damnit" appeared and I made the most of the experience. 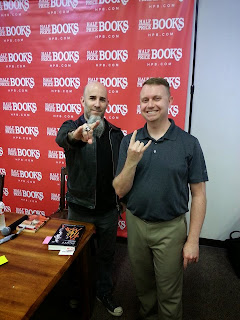 You don't meet people and think you'll only know them for a brief time. You want to have many great experiences with them, because you connect with them the most, compared to everyone else you know. As life can sometimes be cruel and unfair, there should not be a reason to deny yourself happiness again. We cherish the memories we have with one another, and we should not be afraid to create new ones with the new people that come into our lives.