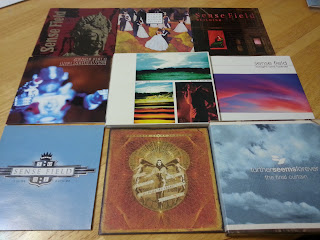 News quickly trickled out on Tuesday afternoon about the passing of Jon Bunch, who had fronted bands like Reason to Believe, Sense Field, Further Seems Forever, War Generation, and most recently, Lucky Scars. People that are very in the know didn't know about it until Jon's family posted something on his personal Facebook page. Since I was Facebook friends with him, I found out this way.

Of course there was denial out of the gate from friends, fans, loved ones, and bandmates. Jon seemed to be happy at 45 and living his life in California. Hearing of his death was a shock, and only now is this shock loosening and the grieving has begun.

I didn't know Jon personally, but like anyone you connect with through music on a deep level, you think you know that person. I had a few brief interactions with him that I shared on Facebook and Twitter, but I wanted to expand on them some more.

In the summer of 1998, I heard about Sense Field through my workplace, Best Buy. One day I saw some guys close to my age holding a Texas is the Reason CD and I figured I should talk to them. Texas is the Reason was like a secret handshake at that time, and I still think they are. In other words, if you dig Texas is the Reason, I probably will talk to you as they are still a revered band for me. These guys spoke highly of Sense Field and I kept them in mind. Not long after, I randomly read a Billboard article about their forthcoming album on Warner Bros. in the break room one day. It seemed like the band had some great momentum behind them, so I was curious.

I moved to Fort Worth that fall and I befriended a guy named Jeremy, someone I stay in touch with to this day. He was all about the Promise Ring and Jimmy Eat World and the whole emo/post-hardcore world that was in the late 1990s. He spoke highly of a new Sense Field EP called Part of the Deal, and at a price that was less than $10, I bought it without hearing a note beforehand.

Right off the bat, "One More Time Around" didn't sound exactly like their contemporaries. Jon had a gentle voice but there was a lot of strength behind it. These five songs weren't enough. I had to hear more. I patiently waited for this Warner Bros. record for months. I picked up their previous records and especially dug Building. These guys played songs that sang about love, friendships, and spirituality, but it wasn't ever cheesy to me. The wait continued. Very little information trickled out about the new record, aside from a possible title of Sense Field or Under the Radar. (I was fortunate to get a CD-R of the album, but I wanted the real thing.)

Eventually Tonight and Forever, which featured a number of songs from the Sense Field/Under the Radar record rearranged with new lyrics and titles, arrived in 2001. Four years was quite a while to wait, and I enjoyed the album quite a bit. I was in some disbelief that I was finally hearing this record. But it was real. (Added bonus: I got to interview their guitarist Chris for my Friday night show on KTCU.)

In 2003, I was a pissed-off 24-year-old trying to understand life after college. I had a major falling out with a close friend, was frustrated with my family and my friends, and I tried to stay afloat in a post-9/11 world. There were a lot of conflicting thoughts and emotions going through me, but music once again was there for me. During this time, I really connected to Sense Field's next record, Living Outside, as well as Hey Mercedes' Loses Control. Jon's lyrics about falling out and reconciling with his father carried a lot of weight for me. I could apply them to the people I thought about everyday.

I was fortunate to see Sense Field with Damone and Hey Mercedes at the Gypsy Tea Room. I was unapologetically That Guy Screaming His Head Off in the front during Hey Mercedes and Sense Field. After the show, Jon walked up to me and I noticed how tall he was. He gave me a very appreciative handshake and we exchanged nods. I felt better and things seemed to sort out in my mind after the show.

A while later, after Sense Field broke up, Jon joined Further Seems Forever and put out a stellar record called Hide Nothing. The opening track, "Light Up Ahead," was in constant rotation as I pondered leaving a job that had turned toxic and I was moving into a new place. Jon's voice always game me hope and that song (as well as that record) gave me so much guidance. Things turned out OK with the job front as I found a new full-time job and wound up living in that new place for nine years.

I saw Jon with Further Seems Forever twice. One was at the original Door and the other was at Trees. After the Door show, randomly, Jon walked up to me and my friend Jeremy. His facial expression looked like he recognized us and thanked us for coming. That was it, but it meant a lot to me.

An important life lesson came out of that: you can mean a lot to somebody just with a handshake and a lot of great music.

This past Tuesday morning, I randomly thought of "Dreams" from Sense Field while I used the bathroom. As I continue to think highly of my girlfriend, I smiled at thinking of the song's lyrics. Only a few hours later, after I heard about Jon's death, it was an eerie coincidence of timing.

Adding to the coincidence pile, I had traded e-mails earlier in the day with a publicist I've worked with throughout the years. We talked about some of her bands that were coming to town in the next few months, and I noticed her agency was now following me on Twitter. After I shared some thoughts about Jon on Twitter, she messaged me to say that she is married to Chris from Sense Field. That's right, the guy I interviewed back in 2001. Small world, but in a good way.

As a music fan tends to grieve, I've listened to Sense Field and Further Seems Forever a lot in the last few days. What Jon had to say and how he said it gave me so much guidance in life, and I will continue to listen to what he gave this world for many years to come. Hearing "One More Time Around" again this morning, there's even more weight to what he said.

Now I think it's safe to say

There's a place that we all stay

There's a time when we all know

It's a place that we all go

It's where we all come from

We play in the warmth of the sun

Laugh so hard we cry

Writing our names across the sky


Thank you, Jon, for all the great music and lyrics.