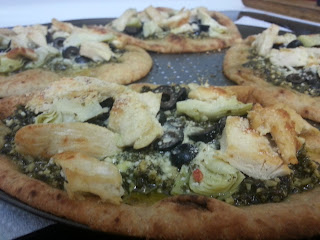 I've never claimed to be a good cook. When I want to make my own meal, my focus has been on what I want and what I can make easily. Usually that means I will make the same meals week in and week out for months. Sometimes, years.

Yet lately, I've felt the pull of trying to cook meals that I've never made when I cook for me and Hope.

In the past, I'd use the excuse of having too much fear of making something that tasted terrible. Why should I make something I had never made before if there's a chance of it being terrible? Since I was not an expert with understanding recipes on the fly (gotta read the fine print or you'll be screwed), it would be nearly impossible for me to make something tasteful and edible. So what was the point in trying?

No co-worker, family member, or previous girlfriend has called me a bad cook. But I never really believed I was even a decent cook. If making something would take more time preparing to get right than the time needed to eat it, I doubted myself out of trying something new.

After Hope cooked us some delicious meals, an epiphany came to me: Why shouldn't I at least try to make something I had never made before? She encourages me by not discouraging me, so why not give something like turkey sausage chili or chicken artichoke pizza a chance?

The meals I have cooked come from recipes found online. I have yet to ask my mother for recipes, but I might someday. I'm up for trying something new every week. Cooking something new doesn't mean I will make the greatest meal Hope and I will ever have. I shouldn't place such weight on myself. If I do, nothing will ever be good enough.

Basically, my weekly criteria/goal is to make something new that sounds like something we will enjoy. Sounds simple enough, but it's taken me this long to understand. I'm not going to chef jail (where I'm banned from the kitchen until further notice) if something doesn't turn out 100 percent delicious.

The underlying message is to put forth a strong effort in something that benefits both of us. If I have to read a recipe repeatedly so I can understand every single part of the instructions and ingredients, well, that's what I have to do. She makes excellent food for us. The least I can do is trying new things and being willing to learn new things. This is all another step in learning to live a life with anxiety instead of living a life dominated by anxiety.