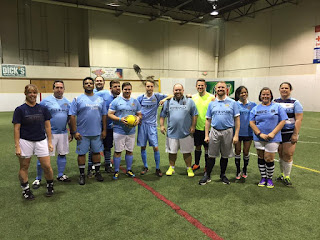 Since I got back into football/soccer a couple of years ago, an idea floated around with a few people I know: playing in an indoor soccer league. Nothing intense or expensive; just friends getting together and having fun.

Thanks to my friends in the Blue Moon Dallas group (whom I spend time with almost every weekend cheering on Manchester City F.C.), we have a team called Oil Money. Our first match was over the weekend, and even though we lost, I cannot wait to get back on the pitch.

Like so many kids who grew up in the 1980s, soccer was one of the sports I played with kids my age. I was into basketball and football casually, but soccer was what I played in a youth league. (I have the Good Job, Good Season trophies to prove it.)

Thing was, whenever I talked about my time playing soccer, there was a sense of embarrassment in describing my "achievements." In the two years I played, I scored two goals. Own goals, though. As I tried to clear the ball away from my team's net, they went the opposite way and wound up in our net. I distinctly remember being furious after one of them, crying, and throwing a massive pity party on the sideline. After that season was over (and a few recesses kicking a soccer ball around), I didn't touch a soccer ball for decades.

It's not like I considered myself a failure with soccer. I had fun playing with kids my age (and with my father being an assistant coach, it was even better), but the only stats I could come up with were two own goals. Some great years were whittled down to a puny stat in my mind.

When I got into the English Premier League through watching Manchester City matches, I talked to people who played soccer in their youth and still occasionally play. No one ever gave me grief for what I did. Every team has experienced own goals. That includes teams that pay their players millions of dollars. The pity party was almost done.

A tug to play soccer again was a chance to score a goal in the opposition's net. If I had the opportunity to avenge, I would go for it.

With my shinguards and knee-high socks on, along with shorts, running shoes, and a Manchester City kit, I got back on the pitch under the guidance of my teammates. A handful of them currently coach kids and know how to get their teams motivated. Plus, I like them as people, so I was in good company.

After only a few minutes of running up and down the pitch, I was dizzy. I thought I was going to vomit. And I felt blood in my nostrils. I decided to slow down and catch my breath. Oil Money had some good touches and a couple of goals. I had a clear shot on goal that misfired. But the key thing was, we enjoyed what we did. Our opponents were friendly and there to have fun, too.

In the second half, the unthinkable happened. Deciding to play on the offense rather than sit back on the defense, I had an opportunity to shoot on goal. Imagining the ball would go straight into the keeper's arms, it rolled up his chest and behind him, finding the net. I could not believe it. I ran right back to the middle of the pitch and almost clobbered a teammate in celebration. Since this was a beer league game, I got a ticket for a free Bud Light after the match. (I drank it slowly after downing water and Gatorade.) 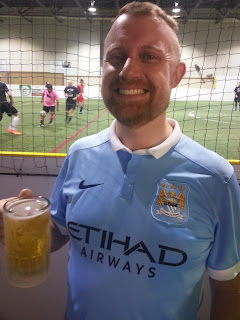 Sure, it was nice to have a post-script after 30 years. But the bigger picture was about how happiness is a choice. You can let the past define your future, or you can do something about your future while acknowledging the past.