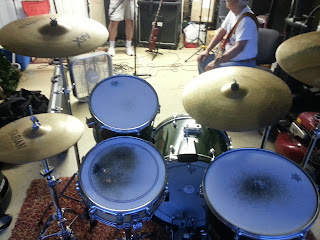 There are some things in life that I cannot escape. One of them is the desire to play drums in a band situation again.

Five years ago, I played a blues jam with some of Bobby Patterson's band. My rock band had recently broken up for the second (and final) time, I was single, and I was about to be laid off from my job at the time. I was up for trying something different and it was a wonderful, one-time experience. Blues music is simple to play, but is a hell of a lot of fun to do. You don't have to overthink what you're playing -- you just stay in the pocket.

That blues jam was the last time I played drums in public. After fifteen years of playing in bands, I was not sure when (or if) I would play in a band situation ever again. Too much of the business of promoting and working a band overshadowed the fun of playing music in a band. I cared about writing songs and rehearsing. I didn't care about networking for the next big show or opportunity. I only wanted to express myself through hitting drums and cymbals.

The urge to play never went away, but I would always remind myself of all the business dealings I didn't want to have. It happened in a few of my bands, and I didn't want to deal with it anymore. I figured if I worked on my abilities as a player (which had been stifled for years), I might get more mileage out of playing again. I had a wonderful time doing Rock and Roll Fantasy Camp, and I believed taking lessons and working on paradiddles would actually benefit me. My focus was on playing my own material, recording drums, guitars, and vocals without any plans in playing live. I thought if I was better at playing the drums, especially working on timing, I could improve my playing of the guitar and bass.

I asked my friend Guyton if I could take lessons from him. He is one of the most in-demand drummers around the area for a good reason. No matter what style he plays, he's solid. And he's a good dude, too. I've learned so much from him, and while I haven't taken a lesson since late last year, I'd be happy to take more lessons in the future.

Throughout last year, he would occasionally mention that I would play a show again. I was very resistant to the idea, using the same excuses I had. I definitely did not entertain the idea of playing in another situation where friendship was forced after a band was formed. I only wanted to play with people I was friends with. Guyton believed in me and could see things that I couldn't at the time.

Still, I was unconvinced. Sometimes I'd run into people I would know in the scene who were interested in forming a band or looking for a drummer. I would tell them I was interested, but nothing ever came of it every time. They say the answer of no can be a gift, but the repeated lack of response would seem like justification of playing my own material in private.

Practicing would continue. When I'd watch a movie or TV show alone, I'd sit and work on my exercises. No matter what happened, this would help, I thought.

This past spring, while I nervously watched Manchester City eek out a win over Liverpool in the Capital One Cup final, a fantastic surprise came in the form of a message from an old friend of mine. Ryan wanted to play a show celebrating his 40th birthday in August, and he was curious how many of his friends would like to play the show. Since the most fun and rewarding show I played was because of him ten years ago (where we played a set filled with Rolling Stones songs), I immediately told him I would be interested. 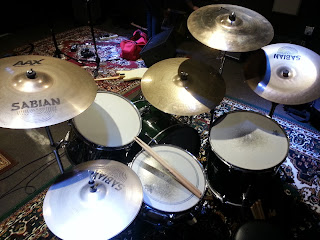 A few practices later, we have a set filled with covers we enjoy playing as well as an original tune to boot. Joined by our friend Nick, whom I played in the 11:30s with, I have never had this much fun practicing with a band. It's probably because these guys are my friends and I will spend time with them without instruments in front of us.

As the Fearsome Brown eyes our first show together, a random opportunity to fill in for a co-worker's band came up. Playing a couple of gigs with a band that plays blues, oldies, and country tunes, I'm excited to help out. This isn't Rush or Metallica, nor is it some party band that only plays the most familiar material ever recorded, playing with this band helps build up my chops and stamina.

I certainly have to credit Hope for helping me see a way of life that isn't constantly distracted by excuses. The attitude of "Why not?" eliminates most (or sometimes all) reasons not to do something, and that includes realizing how great certain opportunities can be. If all I did was play covers and never write new material or learn different styles of music, I'd be missing out. But if I was still making excuses about not playing with people ever again, I wouldn't be where I'm at now.