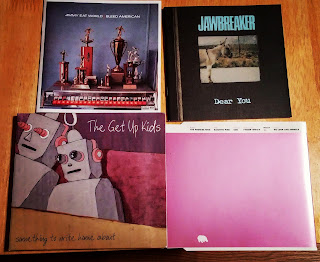 Recently, a couple of writers/podcasters and musicians I know took to social media to vent their frustrations about how certain publications have seemingly done a 180 on emo/post-hardcore. Mainly, Pitchfork.

Ten to fifteen years ago, being an emo fan meant receiving a lot of guff from people who didn't "get it." But what was to "get," and what was "it"? Validation that this music was worthwhile? Praise for albums that have been breakthroughs in the genre? Perhaps, but do we really need validation in being a fan of this genre?

Before social media and Spotify took hold, music-centric blogs were the best ways to find out about emerging artists. You could sample a lot of stuff for free, but you also had to dig, especially if you weren't a fan of indie rock that sounded like '70s pop rock or hip-hop that was perfect for a party. Pitchfork, which started as an online zine, seemed to be the strongest influencer on what people checked out. As much as I hated a lot of its reviews for sounding like the perspective of someone who's cooler than your older brother and the most knowledgeable record store clerk you know, I still read the site almost every single day.

There were times when I found the site helpful, especially in deciding if the Scott Walker box set was worth the investment. (It was and remains something I cherish.) But many other times, I'd find it distracting when a band would be praised (later seen as over-praised) and then be ripped apart (and later seen as unfairly ripped apart). Most memorably, . . . And You Know Us By the Trail of Dead got the love and later, the shred. I get how new music from a single artist can blow our minds or let us down, but it made me wonder what was really going on. Was it flaky attitudes or black-and-white takes?

During this time, while new albums by Arcade Fire, Spoon, and Radiohead (as well as reissues by James Chance and Pavement) were dissected to explain their greatness, many records from the emo/post-hardcore genre were made light of and cast aside. Feel free and read slaggings of now-classic records by Jimmy Eat World, the Get Up Kids, the Promise Ring, and Braid here, here, here, and here. I think a lot of fans of the emo/post-hardcore genre wanted respect, and we weren't getting it from those who wanted to be smarter and cooler than everybody else.

Slowly, the tide turned. Outlets that used to piss all over the genre (or flat out ignored it) hired writers who came up loving the genre. From Rolling Stone to EW, these places were catching up to what Alternative Press had praised since the mid- to late-'90s. But when Pitchfork started to publish reviews that revered bands like Braid and the Promise Ring, (like this one for No Coast and this one for the Nothing Feels Good reissue), all was forgiven, right?

Not so fast. I stopped reading Pitchfork regularly a few years ago as I realized I didn't need their approval to know if what I liked was cool or not. I liked what I liked (as I always have), but being aware of their influence on readers' tastes certainly amped up my defensiveness. Maybe they realized there was an audience that would give the site traffic if writers weren't defecating on American Football, Jawbreaker, Braid, the Promise Ring, and Jimmy Eat World. I'm not sure, but I can understand if people my age are bitter about it now. It's like the school bully who wants to be your friend on Facebook.

I still see a lot of value in the existence of album reviews, but I've reached a point in my life where I don't need to rely on reviews to determine what I should listen to. Spotify makes excellent playlists every week that are based on what I regularly listen to. I'm not turning to publications to justify my tastes. But I still remember what it was like to have to constantly defend what I loved. Whether it was at the campus radio station I worked at (ie, when the station manager called Bob Nanna the worst singer he'd ever heard) or online (ie, enjoy this blog's archives).

For me and my friends who have always loved emo/post-hardcore, now we know what fans of Rush, the Stooges, and Led Zeppelin got to experience in the 1970s. Bands that made awesome records and affected a ton of people were not well-received by outlets like Creem or Rolling Stone. Those bands weren't up to their tastes, and they seemed to enjoy explaining why.

I don't think we should wait to get validation from people we don't see eye-to-eye with. This music has made a huge, lasting impact on us, so why should we want more? Maybe we're looking for an apology or a mea culpa. Life's too short to wait on that. Let's enjoy what we enjoy.

alfan said…
bob nanna maybe don't have that "talent show"-good voice but certainly he sang every word as sincerely and soulfully as any good vocalist in the whole world
11:24 AM