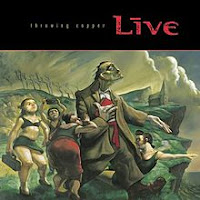 Last week, there was a thread floating around Facebook about albums you listened to in high school. It was a fun rundown of records that made a significant impact on you, but there was another side to it.

Some Facebook friends rhetorically criticized selections on people's lists. They sarcastically thought a lot of people lied. "All these dudes my age trying to act like they didn't like Korn in their formative years," wrote the singer of a doom metal band I admire. I agreed with him, and I saw how the conversation turned deeper. There's a good question of, are you exaggerating the importance of these records, or are you being highly selective in your choices for fear of not being accepted?

I do not claim to having some sort of credibility 20 years ago when I was in high school. I did not try to be the cool older brother or a know-it-all music critic to anyone. I would correct people on things from time to time, but my music listening was mostly a private matter. I was a budding music fan, finding my way through anything that came into my life. (I was still that way in college, but when I worked at Best Buy, I was the guy who didn't get why so many people liked the Titanic soundtrack, but I was not going to stop anyone from buying a copy of it.) My high school years were this: I liked Hootie and the Blowfish and Nirvana. I liked Pavement and Snoop Doggy Dogg. I liked Weezer and Metallica.

Even though the CD was the format for owning music between 1993 and 1997, I spent more time listening to singles on the radio and seeing videos on MTV. (It sure was enjoyable to have my cousin share what he thought about songs I liked in high school.) I wasn't pulled into picking up Cracked Rear View, as I heard half of that record on a regular basis for about a year and a half. I was drawn more to the stuff that wasn't constantly on the radio or MTV.

In writing my list on Facebook, I thought about albums I genuinely listened to many times on dubbed tapes in my 1977 Pontiac Catalina. Driving around Kingwood, I rarely turned on the radio in my car, preferring to focus on albums. All of these records stood out and resonated with me, and I'm happy to say they still hold up today. Here's the list.

Did I own Bush's Sixteen Stone and Korn's first album, as well as Dream Theater's Awake and 311's self-titled album and Live's first three albums? Absolutely. Yet when it came down to impact then and now, those albums didn't make the list.

I wonder why people hide what they loved when they were younger. Is it the fear of being less of a music fan because your tastes were not ready for Neutral Milk Hotel or Chavez in the '90s? You have to look at the present. The people we are now (who have a pretty good idea of what we like and don't like) versus the people we were then.

Why is it whenever we talk about our high school years, we get a little testy and defensive about what we liked? Moreover, who we were? I still struggle with this, but it is a lot easier now compared to a few years ago. I like to joke, if you think I'm emo now, it was even worse in high school.

I think it comes down to how honest one wants to be to an audience. Do you tell a version of yourself that is filled with context or without? Do you want to be selective, focusing on what matters instead of what all happened? Neither is wrong, but I have to wonder, especially if high school was many years ago, have you come to accept what it was?