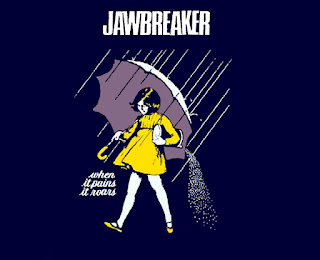 Mere minutes after Jawbreaker announced a reunion show at this fall’s Riot Fest in Chicago, I realized every band I devoted a chapter to in Post has reunited. Next year will mark ten years since the book came out, back when all of the bands (except for Jimmy Eat World) had broken up for the foreseeable future. Since a lot of people who have read the book have asked me if I would do a sequel or new edition someday, I started to ask if one is truly wanted.

A number of people said they would read it, so I started to look into options. After I received rejection letters from publishers, I thought, This is looking like another DIY affair. My hopes to bring this to a larger audience had another setback. I don’t say this with bitterness in my body. I’ve accepted there is a reality about audience appeal in writing extensively about these bands.

When Post originally came out, it was when emo was at the end of its big ride in the mainstream. Now emo is a topic frequently talked about in the nostalgia sense, touching more on bands like My Chemical Romance, Fall Out Boy, and Dashboard Confessional than the bands that influenced them. Which is understandable, as more people have heard of My Chemical Romance than Mineral.

Though there are many excellent emo revival bands around these days, they’re not bound to be mainstream darlings. Tiny Moving Parts, Modern Baseball, and I Love Your Lifestyle have released albums in the past couple of years that I will likely call classics someday, but they’re not on the same level of attention as The Black Parade or From Under the Cork Tree.

And then there are the influential bands themselves. Their music still resonates with me, people my age, as well as people younger and older than me. Yet something I’ve learned in the past nine years is how there seems to be a disconnect between people who praise the hell out of a band online and the number of people who actually show up to a reunion show of theirs. While I hear about well-attended (sometimes sold-out) Mineral and American Football shows in Chicago, Los Angeles, and New York, the demand is significantly less in a town like Dallas. When I saw Braid play to 30 people in Nashville two years ago, I wondered what the hell was wrong here.

It really comes down to this: No matter how many people profess their love of Relationship of Command, Frame & Canvas, or Nothing Feels Good in record reviews or Reddit articles, the numbers are not quite big enough for book publishers to bite on releasing a book about the bands who made them. A new book about the Beatles has more appeal in 2017 because the Beatles are an established topic with generations of readers. What I have is a harder sell, but not that hard.

This is not to say no publisher I’ve encountered wants to do a new edition of the book. Actually, not long after the book came out in 2008, I was approached by someone who runs a publishing house and used to write for a publication I wrote for as well. Thing was, after a couple of email exchanges, something felt off and not right. I had never heard of his publishing house and had never read any of their books. The owner seemed pushy and arrogant, which are traits that usually don’t work well with me.

I told him I’d wait to see how things went with the publisher I used and would get back to him. Through no paid publicity and simple word of mouth, my book went on to sell in places all over the world, and the royalty checks always cleared the bank. I was happy, but not totally over the moon about having to self-publish to get the book out there. Seems there’s a stigma with self-publishing books, making it like it’s not worthy of publication in the first place.

Eight years later, the guy emailed me again, asking if I was still interested in republishing with him. After talking to mutual friends -- in addition to reading an extensive blog post by his ex-wife detailing emotional abuse she received from him during their marriage -- I decided to not pursue working with this guy or his publisher.

As frustrating as the setbacks are, they do not double as reasons not to pursue a new edition in the future. There is more than a short update to add to this book, and I’d be happy to take the time and write bonus content that will make the book worth the reader’s time.

Thing is, I’d like to give the stories of these bands more than underground attention. Their stories meant a lot to people 20 years ago, they did when the book came out, and they still mean a lot. The belief in what these bands were about guided me then, and they still guide me today.