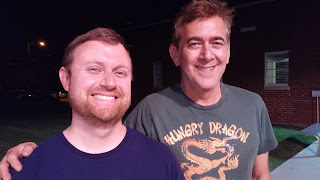 There's a phrase music critics share when news of a musician's death breaks on a major holiday and the writer has to come up with something right then and there for a quick turnaround: a Dead Beatle.

Meaning, this is such a serious loss that whatever you're doing with family and/or friends has to wait. Since no publication I write for demanded something about Tommy Keene when news of his unexpected passing broke on Thanksgiving, I held off on saying something beyond Facebook posts and tweets. But I did stop in my tracks after a long and lovely day with Hope as newlyweds and shared my grief and shock about Tommy's death. He was 59.

Tommy Keene had a long and fruitful career as a solo artist. He came from the Washington D.C. area playing in bands before going solo. His second and third albums, Songs from the Film and Based on Happy Times, were released on Geffen Records in the mid- to late 1980s. At a time when hairsprayed hard rock, teen pop, and the remnants of new wave dominated the mainstream, Keene's music never broke through those barriers. Despite those records sounding more aligned with Bryan Adams' and Cheap Trick's albums at the time, Keene's music had much more depth and immediacy than a lot of other stuff major labels put out.

Keene kept putting out solo records on smaller labels and played as a sideman with the likes of Paul Westerberg and Bob Pollard, among others. Though the records were consistently good to great, he became someone that was taken for granted. He had his fans, but sadly, it looks like the most press he received was after his passing.

If you had never heard his material prior to his death, I made a Spotify playlist of tunes that might make you want to hear his whole catalog.

I've enjoyed Tommy's music for 10+ years now. I can't remember if it was "Places That Are Gone" on a Rhino power pop collection or two MP3s from Ten Years After posted on a friend's blog, but by the time a writer friend of mine, Darryl Smyers, gave me a copy of the Hear You Me retrospective, I went all in. This wasn't power pop meant to resuscitate everything the Beatles did. It was more than that, especially in the power department.

For years, I always hoped to see Tommy play. I heard a Dallas date he played years ago at the Cavern was poorly attended so I didn't think he would come back. When I heard he was coming back through Texas with Matthew Sweet this summer, I decided to go. Sure, it would have been best to see him with a backing band. But if this was all I could possibly get, I decided to go.

Ahead of the show, I got to interview him for an article in the Houston Press. It was a brief but enjoyable chat, talking about where he was at in his career and what he hoped to do next. He put me on the guest list for his show in Dallas at the Kessler and I looked forward to it.

Though the majority of the audience was there for Matthew Sweet, the audience gave Tommy lots of respect and enjoyed his set, which ran all over his catalog. Sweet came on, and as someone who has never really sunk my teeth into his material, I was not motivated to stay until the end. Sweet just stood there and played with his backing band. Not enough excitement for me, so I left.

As I rounded the corner outside of the venue, there was Tommy sitting outside, smoking a cigarette. I introduced myself and he was friendly and conversational. We essentially shot the shit, talking about the tour, sharing pictures of our dogs, and talking about various points in his career. (He confirmed that yes, it was he who played lead guitar on the Goo Goo Dolls' "Broadway.") Who should walk up but my writer friend Darryl Smyers and a friend of his in tow. We all had a nice chat, but after a while, Tommy had to cut loose and join Matthew Sweet for an encore with the band.

At no point in talking with Tommy did he seem bitter about his career. He never became a pop star, but I don't think he wanted to be one. He had the songs, and when you have them, you don't need to be anything more to let them live beyond your life. He had a lot to look forward to, with a new album in the works, a DVD of live footage, and more touring. He didn't act entitled or wanting more recognition. He was happy doing what he was doing, playing and writing music he cared about. This certainly served as a reminder to why people do what they do. And that goes beyond what you think is the best Tommy Keene song or album.

Ted said…
I guess I'm not the music fan I think I am because I didn't know who Keene was before I read your post. But your mention of "Broadway" by Goo Goo Dolls made me re-listen to the song, though. :-)
4:07 PM