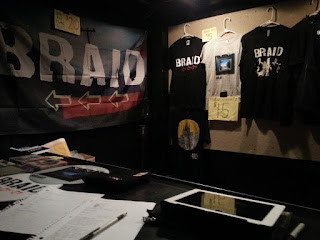 This year marks ten years since my first book, Post, came out. It was a self-released affair put out by a print-on-demand publisher. It’s never sold many copies, but according to quarterly royalty statements, several copies are sold every year in various parts of the world.


I never put the book out to make money. I wanted people outside of my inner circle to read it and find something of worth in it. If emo was a joke to many, then I wanted to show how it wasn’t.

Last year, I had an idea to release a ten-year anniversary edition of the book. I’d update all the chapters, write a new afterword, and see if a publisher wanted to put it out. After rejection letters from publishers arrived in my inbox, I set the idea aside. Seemed like the gatekeepers thought Andy Greenwald’s superficial and error-filled look at emo was enough. But that was not a reason to quit pursuing something I wanted out there.

Only a few days after our wedding, Hope asked me if was interested in doing a new long-term creative project. She suggested a documentary based on Post. While I’m interested in doing something like that someday, I thought a book sequel to Post should happen before that.

Over the years, I had been asked about doing a sequel from a couple of people, including my friend and fellow podcaster, Jim Hanke, on his excellent Vinyl Emergency podcast. My original response was no, as someone else should write a sequel. I had kind of checked out from modern emo when Fall Out Boy and My Chemical Romance were considered equals to Braid, Sunny Day Real Estate, and Rites of Spring.

But after being told no to a new edition of Post, I realized I had a lot more to say and research to do, all in what has happened since 2008. There is too much to put into a new edition of a previously-released book. It’s asking a lot of people to read a 500-page tome, so why not try to put out a new book?

I made my plans for a new book known on my social media back in the middle of January this year. I’ve spent every week since interviewing people, doing research, and jotting ideas down. At the very least, I give myself the goal to interview someone every week, even if it’s interviewing the same person multiple times.

So far, it’s been wonderful to touch base with people I originally interviewed, along with people I’ve met since the first book’s release. There are many people to talk to, so I’m giving myself at least until the end of this year to interview people. No deadline is set at the moment.

Structurally, this new book -- which I plan on putting out myself and calling it Forever Got Shorter -- will be more about the people affected by emo/post-hardcore rather doing lengthy profiles of a dozen bands. Whether these are people who play in bands, put out records, or write about bands that put out records, I am aiming to answer a few questions.

Questions like, Why would you fly across the country to see a band like Jawbreaker play a reunion show or two? Why do you still like emo music when you’re in a much better place in your life? Why is emo still relevant? And, what kind of future do you see with it?

I freely admit that it can be complicated to spend all this time on a passion project that may or may not go over. Being newly married, working a full-time job, freelancing, and playing in two bands, my life is busy, but I try to balance everything properly. My life is much, much more fulfilling now -- especially because of Hope -- and I remember what life was like before. And I don’t ever want to go back to that look at life.

Along those lines, I strongly discourage any writer who thinks blocking out everything in his or hers life in order to write an Important Book. As Stephen King suggested in his On Writing memoir, writing is not a support system for life. It’s the other way around.

Moving forward, I’m very excited about doing this book. There is a lot of work to be done, and paragraphs to write before editing happens. But I’m up for it all.