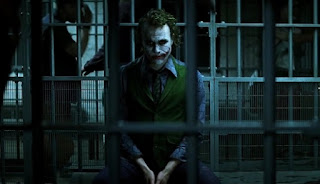 Last week, as I saw numerous think pieces about the impact of Christopher Nolan's The Dark Knight ten years after its original release, I remembered a decision I made prior to seeing it in a theater. I thought the movie was great and all that, but something sticks out to me as I walked with my friends en route on a typically hot day in late July.

The memory is more about what I didn't do and why I did what I did. It's not a regret. It's simply a reminder of the importance of how we treat people.

The movie theater is in one of the biggest malls in Dallas. Since it was a Saturday afternoon, it was understandably filled with people shopping, eating, and whatever else they wanted to do.

In the midst of all these people, I noticed a familiar-looking face. It was a radio talk show host I had reported traffic for only a couple of years prior. Since I reported from a different building, I never met the host. I knew a lot of the news writers and reporters on this station, but not him. And frankly, after having to listen to yell and scream at people who disagreed with him on the air, I thought it was good to not know him.

However, recently, the host had lost his wife after a lengthy illness. As he walked alone among the shoppers, he looked sullen and a little lost. The compassionate side of me felt drawn to go up to him, introduce myself, and say I was sorry for his loss. Then I thought about all the times he would scream at callers, all the commercials for his show that featured him declaring, "You will not out-shout me!!!" and the times he was in front of a camera ripping apart people who didn't hold his same political views.

Since me and my friends wanted to get a good seat in the days before reserved seating in a movie theater, I let the moment pass and I kept walking without stopping. I thought I should have said something, but then I thought, If this guy wants to present himself as a polarizing person, then he should be left alone. He deserved to be alone.

As cruel as that might sound, I don't regret holding back.

Others might credit karma or revenge, but I stand behind an idea that toxic people deserve all the disappointment in their lives. You might have a lot of money and/or power, but if you routinely treat others like dirt for your feet to walk on, then I don't have much or any sympathy for you when something unfortunate happens in your life. I'm definitely not one to wish ill will on anyone, but I don't want to hear any whines or complaints when life hands you a challenge that you may never get over.

Yet what's weird about media personalities is distinguishing the difference between who they are with a microphone in front of them and who they are without one. I've worked with some total divas who sounded like warm and funny gentlemen on the air. I've also worked with people who are eager to be liked by everyone at the station, yet get on the air and cast scorn on those who have the opposing stances as them.

The purpose of this is not about what your political views are. It's how you treat those who see things differently than you. Of course I'm not OK with participating in illegal matters, but I'd prefer to not be a monster towards people who voted for someone I didn't for.