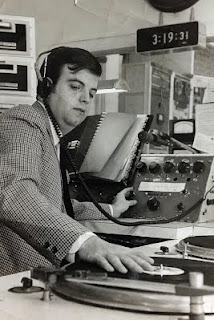 If it weren't for Chuck Brinkman, I highly doubt I would have ended up in the traffic reporting business.

Not long after I graduated college and had worked in radio promotions for a few Infinity Radio stations, I was offered the chance to produce the afternoon show on KLUV, then an oldies station. I had known the previous producer and she did not like the job whatsoever. Eager to see what the job was really like, I took it on.

Though I made mistakes on my first day, Chuck gave me another chance and let me come back the following day. As tough as this job was, I ended up working for Chuck for two years.

During that time, which seems like a very short period in retrospect, I remember laughing quite often. There were things to do at all times, from answering the listener line to relaying messages to account executives. Yet there was time to hear stories about introducing and interviewing the Beatles, being around the Carpenters, and random trivia about 7-inch singles.

Roughly a year into my time with Chuck, I asked him if there was a way my position could be full-time. For whatever reason that doesn't matter now, my position was seen by the higher-ups as what interns and part-timers did, not a full-timer. Chuck suggested I call the director of operations at the traffic reporting service we used.

Even though my only experience with traffic reporting was watching our airborne reporter, Ben Laurie, compile his report, along with driving around the metroplex for promotional appearances, I seemed to be qualified for a weekend reporter position. So, to make ends meet, I worked at KLUV during the week and on the weekends as a traffic reporter. Months passed without a day off, but I was happy to be on my own.

But things got to a point where I needed a full-time job. And that meant I had to leave KLUV to work full-time in the traffic reporting world. Chuck wasn't happy about me leaving, but he understood why I had to do what I needed to do.

I continued down the road of traffic reporting, even with two layoffs. I heard from Chuck a couple of times, but the last time I saw him was at Ben Laurie's memorial service. I knew KLUV had gone in a slightly different direction, dropping the oldies moniker and going with the classic hits format. Chuck left the station after many years, working at an easy listening station and co-owning a station east of Dallas.

Last Friday, Parkinson's took Chuck away from the earth. He was 83. Only a few days before, I got word that the traffic reporting company I work for is about close down this fall. A big coincidence, and one that's been on my mind a lot lately.

I am not exactly sure I know what I will do next professionally, as the options in this industry are less and less. But if there was ever a perfect time to utilize my skills as a verbal communicator and writer in a field outside of broadcasting, now is the time. And I'm totally up for it.

But if it weren't for Chuck, I'm not really sure I would be doing now. Sometimes we need people to give us a little direction and we eventually find the path we want to be on.