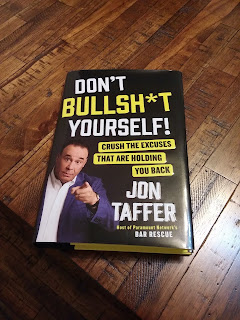 Over the final weeks of summer, I found myself watching a lot of episodes of Bar Rescue. As in, as many as I could watch on TV and online for days. I had been aware of the show for years, but I never realized how host Jon Taffer is more of a life coach than a consultant until he was a guest on a friend’s podcast.

Though I don’t have any aspirations of owning a bar someday, I struggle with anxiety and pride issues. That’s why I found Taffer’s tough love really engaging to hear. What he had to say to delusional owners rang true. It was easier to understand my hang-ups reflected in people that had even worse ones. I even bought his book, Don’t Bullshit Yourself! Crush the Excuses That Are Holding You Back, and read it in record time for my usually slow reading rate.

One episode that really stuck with me involved a California bar owner who insisted his dive bar only needed upgrades to its interior, but not any improvements that could very likely bring in more paying customers. He wanted a kitchen, but not better acoustics or a diverse drink menu. The employees knew the owner was stubborn and there was no point in challenging him.

The guy’s excuse for how he was? Punk rock pride. Not the loose idea of punk rock where you follow your own path in life. Rather, the kind where a limited view of life is because of the fear of selling out. Punk rock pride sometimes leads to punk rock guilt, leading you to wonder why you were afraid of change in the first place. But not with this guy. Apparently, through the magic of editing, he is someone who could not fathom non-punk rock fans coming into his bar. Any major changes would lead to massive failure, even though his business was already failing.

Taffer is not a stranger to punk rock. He managed the legendary bar the Troubadour in the late ’70s and dealt with bands like the Dead Kennedys and Fear. Rather than seeing punk rock through the eyes of the scriptwriters on CHiPs and Quincy, ME, Taffer saw things firsthand.

So it made sense in this episode that he brought in his friend Joe Escalante from the Vandals to give some feedback. While the bar owner recognized the band’s name, he dismissed Escalante’s criticisms because of the cardigan Escalante wore.

After trying to talk some sense into the owner, Taffer decided to not rescue the bar, which has only happened a couple of times in the show’s history. Despite it losing money each month, it’s still in business as of this writing. Certain people online say it’s because the guy came from money. If that is true, his hardline stance of keeping it strictly a money-losing punk rock dive bar is easy to have when he has a steady foundation of cash to walk on.

I’ve been in venues that pride themselves in being a dive, but also understand how to run a successful business. Whether it’s welcoming regulars as well as newbies, booking non-punk bands as well as punk bands, or selling creative mixed drinks in addition to cheap beer, the owners understand how to run a business rather than spout punk rock views they heard at a Pennywise show.

Why I related so strongly to this episode came from realizing having a purist attitude usually boxes you in throughout your life. Rather than trying something new on a relatively regular basis, you routinely fall back on what you already know. Any sort of change for the betterment of your life is treasonous.

And thus, I understood something deeper about what has held me back for many years: fearing change and admitting to making mistakes. I thought perfection could be obtained. I could be free of mistakes, full of wisdom, and be an expert on practically anything. And I didn’t have to listen to what anyone has to say because I’m smarter than everyone else.

It’s really easy to boast about your righteousness and not listen to what people have to say, especially those closest to you. But it can be hard to fathom why you have fallouts with friends, loved ones, and significant others throughout your life. You’re just being yourself. It’s always their problems and faults that drive them away from you, not the other way around.

Therein lies the nonsense you can believe for years. Even the entire rest of your life. Punk rock says to fight authority, be yourself, and not be a poseur. Well, you don’t have to agree with everything your boss or politicians say, and you don’t have to listen to trendy music, but you can’t win in the fight for its extinction. Just because you disagree with others doesn’t make you some superior being. And if you don’t want to listen to what others have to say, why should they listen to you?

If life is like living in a big house, you can either live where you’re free to walk around it or you relegate yourself to sitting in a small corner. After living in a corner for so many years, life is way more hopeful and exciting living in the whole house.