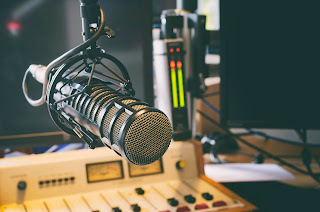 Earlier this week, a number of people I used to work with in broadcasting shared pictures, lists, and stories on social media for National Radio Day. Rather than write out a list of stations I worked for -- either as an intern, promotions assistant, producer, or traffic reporter -- I thought about advice I would give about the broadcasting world, along with reflection.

No matter the field, I hate the advice of “Don’t” when people consider working in a field. Also, I hate the line of, “You’ll never make any money in it,” assuming people only want to get rich going into any field. I still remember what it was like to be eager to learn about a world I felt drawn towards, whether it was broadcasting or journalism. And I remember how the bitter folks made for a lot of excess noise and were in the way of finding things out for myself.

I was in broadcasting for almost 20 years, until last year. And I have zero regrets being in it.

I now work full-time for an auction house, where the majority of my time is spent describing rare merchandise from the music, TV, and film world. I also help out with some marketing for an upcoming auction, whether it’s doing a Facebook Live session or making an appearance on a radio station. So much of what I learned in broadcasting and journalism makes this the best-fitting job for me. I’m grateful to do what I do everyday. Instead of trashing the field I learned a lot of marketable skills in, I stress the value of making the most of any job you take.

A big part in describing the items I write about is getting to the point. With all the years I spent reading 15-30 second traffic reports on the air, getting to the point was vital. Addressing a lot of pressing matters in a short timeframe was also crucial. Those are things I have to do everyday, describing the uniqueness of an item and why it should be taken into consideration.

If all I thought about was the amount of money on my paycheck, I could think broadcasting was a waste of time. The industry does have high-paying jobs, but a lot of other jobs pay far less. But I wanted the experience most importantly, along with a liveable wage (which I always had). I’ve found that’s what a lot of people want. Why should I discourage people from an experience they can learn a lot from?

Ultimately, I decided to exit the business after my company shut down last fall, leaving the only main option to go to a company that bought the previous company I worked for (and was laid off after they bought it). Rather than be a Bitter Former Broadcaster on Facebook who loves to talk about how things used to be (and insist on how things should be now), I chose to move forward with my career, wherever it was. Hope helped massively with making this transition, believing in me more than I believed in myself at times, frankly.

I still think about broadcasting a lot, from the terrible bosses to the best bosses, the odd hours, the characters I met, the egos at play, the paranoid few, the random divas, and other experiences. Nothing went to waste.

I accept that I will probably hear the observation of, “You’ve got a radio voice!” for the rest of my life. I counter that I wanted other things in life, where my personality and wants ran counter to the field. I wanted a full night’s rest on a regular basis, and have the availability to spend time with family and friends on holidays and weekends. Plus, I use the example of how my father, whom I sound exactly like, worked as a chemical engineer for almost 40 years. He’s used his pipes to introduce the hometown marching band at football games for 20-plus years.

A happy life involves exploring and opening yourself up to new experiences. If all you do is listen to bitter people who have at least 20 more years of life than you, you can rob yourself of having such experiences.

December 07, 2020
" We’re not repeating history/Just the parts that sucked ” -Ben Folds, “2020” For every year since 2001, I cobbled together a list of my favorite albums of the year. I’d share it with friends via e-mail. Then those lists morphed into extensive posts on this blog.  This year, I do not have an extensive list of albums, but I do have a near-three-hour Spotify playlist of tunes that caught my ear .  I really loved Hum’s surprise album Inlet , as it sounds like the natural progression from Downward is Heavenward . Dogleg’s Melee shows a young post-hardcore/emo band that has a lot of promise. And an EP from a bus driver in Denton recording under the name It Me shows he should make this one-man project into a fully-formed band.  Why did I opt out of exploring entire albums en masse in 2020? Well, my mind was on other, much more important, matters. Having the focus to devote 30-55 minutes to a new album while working or driving was difficult. I don’t think I’m alone here.  This was not t
Post a Comment
Read more