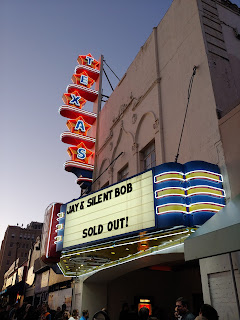 It’s been four years since Hope and I have officially been together. (And a week shy of two years married.) It’s hard to think of a better way of commemorating the occasion than sharing the experience of meeting the guy who — in some ways — helped bring her and I together: Kevin Smith.

To recap: Hope and I met through Twitter only a short time after Kevin’s 2015 appearance at the Texas Theatre. She related to the thoughts I blogged about after hearing Kevin’s two-hour epic response on how to stay positive in spite of people constantly saying you suck. Even though it was a Twitter interaction, I had never felt a pull that strong to someone before.

I sensed something was way more to this woman than I could put into words. It was more than her finding inspiration in Kevin’s response when many of the people in my earshot who complained how only one question was answered over a two-hour period. There was depth I wanted to know more about — and I wanted to know soon.

After she put out the first episode of her horror-themed podcast, I gave her some unsolicited feedback, stating she was a great host who needed to boost the audio level some more. That led to her being a guest on my podcast a few weeks later. Over the course of our conversation that evening, we realized we were sitting in the same row for that Q&A. This realization came from when I described a moronically drunk dude in front of me waving around a Tusk DVD slip cover with a major case of plumber butt. She was seated only a few spots away from me and saw the guy as well. Given how my anxiety-laced blinders were on full blast and focusing on the stage, I didn’t see her that night.

Thanks to Twitter, it brought us together. As awful as Twitter can be, our story is proof that good things do happen because of it.

Skipping ahead to stay on topic (the value of growing, learning, and loving each other more and more everyday should not be made light of, but I have to follow through on the tease in the first paragraph), we were fortunate to share our story to Kevin in person last weekend.

Thanks to the generosity of a friend Hope met through Tumblr years ago, he introduced us to Kevin at the end of a long night of two screenings and Q&As for Jay and Silent Bob Reboot at the Texas Theatre. Even though it was late in the evening and everything needed to be wrapped up, Kevin took the time to hear the story of how we met and we thanked him for bringing two Why Not? people together. He said it warmed his heart to hear this, and not in a stock answer kind of way. He was moved, even though he’s heard about many couples before us that bonded over his work. After a brief talk about filming in New Orleans (a number of iconic places from my place of birth are in Jay and Silent Bob Reboot), we snapped a couple of pictures with him and Jason Mewes. 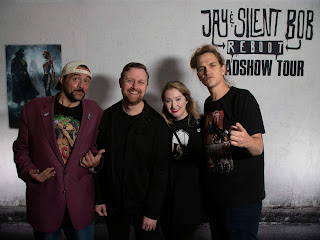 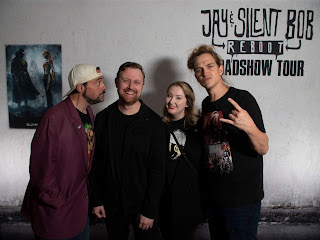 I have longed championed the idea you should meet your heroes if you have the opportunity to. Sure, you always run the risk of ruining your appreciation of someone if the encounter sucks, but what if it doesn’t suck? Most of the people I have admired and have been fortunate to meet have been wonderful. It would have been sad if I avoided them for fear the experiences would be unpleasant.

Coming away from the experience with Kevin, I’m reminded once again about the importance of having a Why Not? person in your life. I’m not talking about someone who says “You can do anything!” superficially knowing full well you have your limits. I’m talking about someone who believes in you and your potential and wants you to challenge yourself and succeed. It doesn’t have to be a spouse — it can be a friend, a boss, a bandmate, a family member, and so on. Kevin spoke of the people in his life that were that way in 2015 (namely, his wife and Johnny Depp), and I’m thankful to have one in mine.

So whenever I hear people deride Kevin’s work (I’ve heard complaints firsthand since Dogma was released in theaters), I unashamedly say I have a different sort of bond with what he’s done. I might not like everything he’s done with film, TV, comic books, and live appearances, but if it weren’t for what he had to say on one hot August night a few years ago, I’m not sure I would be in the better place I am now.

Pantograph Trolleypole said…
Such a great story of love and moving past the negativity. So happy for you and Hope Eric and looking forward to seeing what the future holds for you.
6:47 PM