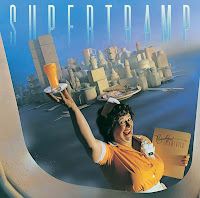 When I first heard a Supertramp song, I thought there was irony in where I heard it. Featured on the thirteen-song Magnolia soundtrack, "Goodbye Stranger" and "The Logical Song" seemed out of place between the low key pop songs by Aimee Mann. It was like a couple of Bat Out of Hell songs from Meat Loaf were featured on a compilation dominated by Clouds-era Joni Mitchell. As in, bombastic, multi-layered songs tacked on a collection of moody, Sunday morning songs.

Plus the band had a silly name. Supertramp? Really?

With the insanely-high vocals and jazzy beats of "Goodbye Stranger," I passed off the song as a product of excessive late 70s/early 80s production aiming for the same audience that made Styx and REO Speedwagon household names.

Well, I still feel that way about the band, but after hearing "Take the Long Way Home" a few times, I've decided I need to invest a lot more time into this band's catalog. Given how much I love Ben Folds' sense of pop melody and songwriting, Supertramp sounds like the bridge between Elton John and Ben Folds. And Steely Dan. And Todd Rundgren. And, to a small degree, Air Supply. All artists I un-ironically love. Yes, I love Air Supply.

In other words, I have a lot of Supertramp music I need to listen to.

Just this morning, I took a listen again to "Take the Long Way Home" as one of Jenny's favorite iTunes playlists was on shuffle. The song's pre-chorus really grabbed me and I wanted to hear it again and again. So I later took a listen to Matt's copy of  Breakfast in America on vinyl. Already I'm in love with the aforementioned "Take the Long Way Home," but also "Just Another Nervous Wreck." It's like Burt Bacharach interpreted for a Broadway musical. And that's something I can dive head-first into.

Still, with a silly name like Supertramp, I should put the music on and not care about the band's image or album covers. I should just enjoy the tunes.

Ted said…
Well, Supertramp is hardly the worst name in rock, but "Breakfast In America" was like on a non-stop loop when I was in junior high. Not my choosing, mind you. Top 40 and AOR couldn't stop playing the songs off that album. I burned out on it a long time ago, but I still like the live version of "Dreamer" from the album "Paris" that came out after "Breakfast In America." It's not their best song by a long shot, but there's something about it that I just like. Not much of a fan of the studio version, though.
11:35 AM