Where the puck is going 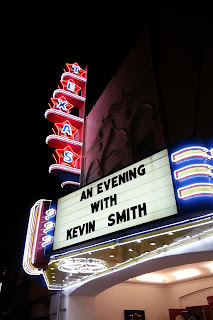 Given how long I’ve admired Kevin Smith’s work and ethos, it’s a little strange how I had never seen him live before. I first heard about him in 1994 and really got into him in my college years, especially in 2000, when I played catch-up on all of his films on DVD. Whenever he’d come to town in the past, it would be at big conventions or nights I couldn’t go. So, when it was announced he would be at the legendary Texas Theatre on a Friday night, I figured now was the right time.

Seeing Kevin in person (and spending two hours with a sold-out crowd) was like catching up with a college friend over the course of an evening. Though he technically answered only one question, he delivered an inspiring rant about accepting yourself when failure is possible at any time. Recapping the Wayne Gretzky adages of missing every shot you don't take, and you should skate where the puck is going instead of where it's been, he built on those pieces of wisdom. (I heard a lot of people complain after the show how he only answered one question, but damn, what he said really trumped tidbit answers about upcoming projects or previous projects that never happened.)

Kevin might address a room filled with people at his Q&A’s, delivering stories like a stand-up comedian, but what he has to say seems like he’s talking directly to you. There’s a lot of sincerity with what he has to say, and I really appreciated that.

It was fun to write a cutesy article for the Observer about "10 Questions You Should Not Ask Kevin Smith." But the bigger picture at hand was realizing how important this guy has been for me.

I freely admit my enthusiasm for a number of Kevin’s projects in the past ten years, whether it’s a film or a podcast, has not been very strong. I’ve seen every movie he’s made and I was a regular listener to his SMODcast for a few years. Given how many podcasts he does these days, it got to a point where I couldn’t keep up and lost interest. (Hearing him think outloud while he was baked didn’t make me want to hear that week in and week out.) 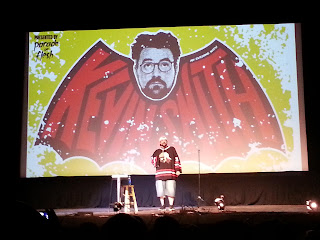 The question he answered was about how he stays creative even when there are a lot of people who want to remind him of his faults and limitations. He touched on working with Bruce Willis on Cop Out, characterizing Willis as a “Why?” person. Since he had a lengthy rant on Too Fat for 40 on the difficulty of working with a jaded famous person who made it in Hollywood and now phones his performances in, what he shares now is what it was like to work with “Why not?” people.

It’s important to point out how “Why not?” people are not necessarily “Yes!” people. You shouldn’t fill your life with people who tell you every thought or idea you have is the best thing you’ve ever come up with. At the same time, you shouldn’t fill your life with people who constantly tell you how awful you are. With Kevin, he openly admits how critical his wife Jennifer is of his work. When she showed tremendous interest in the script to Tusk, that floored him. A film that audacious for Kevin to do yielded the hope of seeing if he could actually make it.

He spoke at length how this led to working with Johnny Depp on the film. The point of why he spoke so long about this was to show how Depp as a person was the polar opposite of Willis. Depp didn’t have to do Kevin’s three-million-dollar film for a paycheck, but he loved the character that he played (and especially the accent he created for the role). I thought of this story as the upswing after the downswing of Cop Out.

Kevin briefly mentioned how failure is preparation for success. That, essentially, is what drew the strongest response out of me. I still have an uneasy relationship with failure and rejection, but a true failure is not trying at all. Then things all came together in my head about why I was in a room listening to Kevin speak.

I flashed back to college, listening to commentary tracks for Mallrats and Chasing Amy, repeatedly watching scenes from Chasing Amy, reading his scripts and comics -- all serving as inspiration for a  screenwriting class I was in at the time. I haven't written a script since college, but the inspiration of creating the kind of stuff you want to read/see/hear has always been there. Couple this with a pivotal scene in Rad! (where the hero decides to create his own company for sponsorship), and you, essentially, have why I do what I do today. Whether it's the podcast, this blog, writing books or articles, I do these things because I want to, and I'm not afraid to share this with people I don't know.

Kevin's not the only influential person on my creative pursuits, but he certainly inspired me to get on the path I'm on now. I might not end up loving Yoga Hosers or Mallbrats or even Clerks III, but I want to see them. And I certainly would not want to pass up a chance to see him again. It would make for another fun evening of catching up with an old friend.