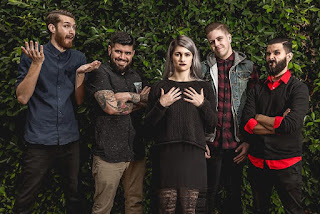 Once again, another band trailer robbery has happened in North Texas. This time, the trailer belonged to Iwrestledabearonce, an emerging schizoid metal band. It was stolen when it was parked in a church parking lot in Denton on North Bell Street just for a night a couple of weeks ago. A drum kit, all of their merchandise, road cases and speaker cabinets were stolen on September 20. It was estimated at a $20,000 loss.

Yesterday, a GoFundMe page was set up to recoup some of the money they lost in the theft, with an initial goal of $7,500. They set their initial goal to fulfill their upcoming U.S. tour dates starting at the end of this month, but additional funds are gladly accepted. (The funds already raised were close to $5,000 by last night.)

The band’s bassist, Michael “Ricky” Martin, lives across the street from the church where the trailer was stolen, and had thought of Denton as a safe place where you don’t have to worry about a theft of this magnitude. After filing the report to police, there have been no leads from police or friends of the band.

This is not the absolute worst thing that has happened to this band, but it is definitely yet another setback. They changed singers a few years ago at a critical period in their career, and when they all lived in a house in Birmingham, all of their personal possessions were stolen while they were on tour. While this loss is big, it certainly is not a reason to cancel any future tour dates or call it quits as a band.

“We’d much rather go into debt ourselves just to keep going, at least to see if we could eventually recoup just from becoming a bigger and better band,” Martin says. “We don’t make much money, but we continue to do what we do because we love doing it. We love playing in front of people and we love to inspire people. We do this because it’s awesome to do. It’s awesome to travel the world and do what you like to do.”

Not only have friends and fans of the band helped out already, the band’s label, Artery, has already extended help with merch and plane tickets. “I’m really surprised with how many people have helped,” he says. “It’s crazy how lots of people are responding and helping us out. It really encourages us to get better and play more.”

The white trailer has a pretty noticeable thing on the back: a smiley-face created out of reflective tape. “It would be ironic to see it now,” Martin says with a laugh.