Onward, through the night 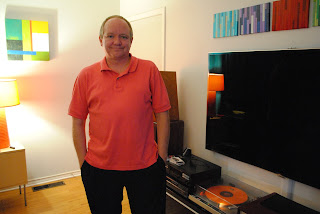 It has been a full year since I lost my friend Evan Chronister to an accident. I have written plenty about what he meant to me when he was alive (this piece and this piece sum up everything pretty well) and I have certainly not shied away from talking about him to friends, family, and co-workers during these past twelve months.

This is how I've processed the grief, which I accept is an ongoing matter. And I think a part of this process is sharing what life has been like without him in the physical sense.

When I go to record stores these days and see a vinyl record reissue, I remember the caution he told me, as well as many others: the record label is ripping you off! Many reissues of classic albums simply ported over a CD mastering to vinyl, thus making it not an actual vinyl mastering. He could tell in the sound quality, and while I took his advice seriously, I have yet to do a side-by-side comparison. The guy cared about music listening as much as the music itself.

Only a couple of days after his death, my housemate Joel and I inherited a lot of vinyl LPs from his massive collection. From Ghost to Hawkwind to Saxon to Rainbow to Rush, I have tried to give these records as much love as he did. I identify myself as a music enthusiast, and my vinyl collection continues to show that as I have Goblin next to Andrew Gold, Mastodon next to Johnny Mathis, and Blue Oyster Cult next to the Born Free soundtrack. I don't show my collection to impress people. It's more to show how scatterbrained my taste in music is.

Evan never gave me hell about liking what I liked, which was refreshing. I was so used to being chastised for liking Black Flag, Rush, and ABBA. He recognized the passion to find music you love, no matter how hip or un-hip the artist was. That's an idea I've really tried to stress to impressionable music fans I know.

For many years, I would fear making musical recommendations to people. Too often, I'd praise something that people found to be the opposite of praise-worthy. These days, I'm happy to recommend bands to people that are curious. It's not an invitation to the Cool Kids club; it's an educated guess based on musical preferences.

I have a cousin who's in college now. He's into all kinds of music and is open to recommendations. I decided to make an ongoing Spotify playlist for him that I update weekly. I don't fear him disliking something I put on the mix. I'm simply happy to interact with somebody who likes to seek out things he's never heard before.

Over the summer, I talked to my cousin about seeing concerts. He lives in an isolated college town where a lot of country acts hit, but certainly not a regular stop for any other genre of music. I suggested he ask around with friends who play music if they know of any performances that happen in the smallest, non-traditional places, like coffee shops and garages. Apparently he's all about the local scene now, and I'm happy to hear about how much he loves it.

It's highly doubtful I'd be inclined to roll the dice and make suggestions if it weren't for Evan. Now I find recommendations to be an enjoyable activity.

I learned a lot from Evan and I certainly miss him, but I'm glad I did know him and many people who knew him well. The memories of my time with him will not fade away. I must continue the life I want to live, and I hope those who knew him do, too.