Hope at the Dawn of the Dating Apocalypse 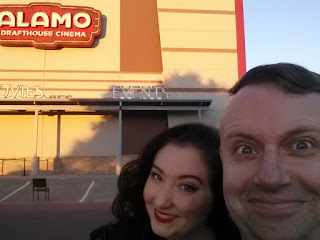 Last summer, I wrote about being single in the age of a possible "dating apocalypse." Basically, I thought there was still a good chance I could find somebody special even though the effects of dating apps, as well as social media, have become so common in the modern dating life. The Vanity Fair article I linked presented a spreading of a culture where people are more drawn to hook up with a lot of people rather than take time and work on a promising (and potentially long-lasting) relationship with one person.

Coupled with what I had seen firsthand through the dating site OK Cupid, along what I've heard and seen in person and what I've seen on social media with people I know, I started to believe the chances of me finding anyone incredibly special seemed like a longshot. But deep down, I held out hope no matter how many times I'd hear something like, "Women only care about how much money you make."

I reached a point where I thought, if I remained single for the rest of my life, then that's what happens. Not very long after I reached a stage of acceptance with that idea, I met Hope.

Through the power of Twitter, Hope found my review of Kevin Smith's appearance at the Texas Theatre. She liked the review and identified with the inspirational words Kevin said over the course of the two-hour appearance. She tweeted the review to Kevin and I tweeted a thank-you note to her in return. When I saw she had a horror-themed podcast based in North Texas, I immediately thought she would be a perfect guest for my podcast. Since my podcast is about people flexing their creative muscles while also holding down a job and other adult responsibilities, I thought I would have an enjoyable hour-long discussion with her.

Something made me think, if she could strongly connect to Kevin's ideas, then we could possibly talk about life and creativity on a similar frequency. I didn't think of this as someone I would date, as I had no idea what her background was. She looked cute on her Twitter pic, but I didn't know if she was single.

Before I asked her to be on my podcast, I listened to the first episode of her podcast and decided to give her some unsolicited feedback. Giving that can be a very easy way to come across as an arrogant asshole, especially when you don't know this person in real life. But I thought my feedback, which praised her uptempo and engaging conversation skills while suggesting some technical adjustments in the sound quality department, would be helpful. She responded in kind and then I asked her to be on my podcast.

The podcast episode went well and we continued to talk after the episode wrapped. I felt a very strong connection to her and wanted to see her again. Turns out, we sat in the same row at the Texas Theatre as we both were near an obnoxious drunk guy with a really bad case of Plumber Butt. We made plans to do another episode, a fan commentary on Student Bodies, but things quickly developed where there would be more conversations without microphones in front of our mouths.

Before we recorded our second episode together, I had been asked at the last minute to cover a Motley Crue/Alice Cooper show and I had a spare ticket. I decided to ask Hope and she responded in such a positive way where I thought, I really, really like this woman's energy and enthusiasm. She's pretty on the outside and on the inside -- and she has all the traits of being a Why Not? person instead of a Why? person, as Kevin Smith described at the Texas Theatre.

After spending more time together over the next few weeks, we decided to be a couple in early November. She has a personality that radiates inspiration and encouragement for me. She inspires me to be more of who I am, and accepts who I am now instead of what she wants me to become. She tries and I try, something that was suggested I strongly focus on in a relationship.

In this age of a forthcoming dating apocalypse, I express gratitude every single day she's in my life. I never would have found her through Tinder or OK Cupid as she's not a fan of those apps. She's more old-fashioned, wanting a quality relationship with one person rather than a string of superficial hook-ups with various people. That's what I wanted, and I believe there are still many people out there who want the same, instead of this supposed norm of hook-up culture.

I encounter a lot of tweets and Facebook posts about frustrations with Tinder and OK Cupid. While I don't think those sites are a waste of time in trying to find a new relationship, I must stress that one should be open to other avenues. Whether it's a book club, a tailgating group, a soccer-watching group, or volunteering at a soup kitchen, go where you want to be. And don't be afraid to open up and share who you are.

Where there's life, there's hope. As convenient as dating apps can be, they don't represent everything out there in this world. You have to be willing to do more and take different approaches if you can't find anybody through that route. We might rely a lot more on technology these days, but there are some parts of life that technology can never reach.