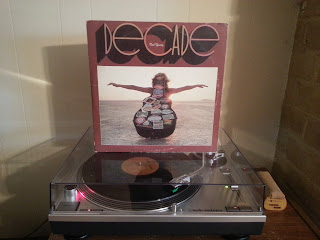 It only took me 22 years, but I finally understand why so many music fans prefer the sound of vinyl over any other format.

When I was a teenager, I remember Neil Young proclaim the superiority of the sound of vinyl. I didn't understand what the hell he was talking about. That sounded like an old cranky man who was out of touch with the youth of the day, even though he could still rip some amazing solos when he'd play with Pearl Jam.

Vinyl was the dominant format when I was very young, but by the time I was actively listening to music as a teenager, CDs took its place. Compact discs sounded the best at home while cassettes were the most convenient for the car stereo. (Yeah, I don't miss the days of a CD skipping in a car stereo any time I hit a small bump in the road.)

In response to Young's comment, I wondered, Why in the world would I ever take a listen to something that was bigger and clunkier, and it had snaps, crackles, and pops added in?

Only a few years later, I was a major completist, especially with punk bands. Vinyl might have disappeared from stores like Sam Goody and Sound Warehouse, but locally-owned stores and distros still carried 7-inches, 10-inches, and 12-inches. And punk bands still regularly released singles during that time with songs that were not on CD. Since the singles were cheap and I had to have everything that face to face released, well, a tentative rekindling with vinyl began.

Picking up face to face's split 7-inch with Horace Pinker led me to want everything Horace Pinker ever produced on CD and vinyl. A similar thing happened with bands like NOFX and Dropkick Murphys. I could put up with the pops and crackles as I dubbed all of these songs onto cassette tapes. Again, I had to have everything by a band I loved.

By the time I moved away for college, the 7-inch collecting stalled out. Occasionally I'd grab some LPs from labels who supplied my campus radio station with merch. I didn't plan on listening to Andrew WK or Pete Yorn vinyl LPs as I was very satisfied with the sound of CDs. (I was happy driving around without having to worry about CDs skipping in the car stereo.)

Alas, some friends of mine I made through the campus station liked to listen to vinyl LPs from their parents' collections. Hearing Love's "My Little Red Book" and Buddy Holly's "That'll Be the Day" on old turntables vinyl was fun, but I never thought this was the better way to enjoy music.

Aside from a memorable late-night listening to Tom Waits' Small Change in a Chicago loft one fall, where the beautiful strings and piano on "Tom Traubert's Blues" bounced off the brick walls and wood floor, I remained a CD-only person.

When Matt was my housemate, he started collecting albums by artists he loved as a child. Whether it was Frank Sinatra, Conway Twitty, or Billy Joel, he loved picking up stuff that was not easily-found anywhere else. He had an all-in-one player from Target that could play records, CDs and MP3s, and he frequently spent time in our front room listening to those LPs. Weekly visits to Half Price Books yielded more and more records. When he didn't want a copy of Eric Carmen's first solo record, I decided to pick it up and thus, a new collection was born.

Joining the Pet Shop Boys record I got back in 1987 (as it wasn't available on CD or tape the day I went to Sam Goody) and the 7-inch collection would be more albums that I had never seen digitally remastered for CD. I realized there was much more to explore this way, and I haven't really looked back ever since.

But what remained a mystery was finally solved this past Christmas: the actual sound of vinyl on a good turntable and decent speakers.

I had to upgrade to a better turntable as the portable one I had could not play 180-gram records at the correct speed. Santa Claus brought me an Audio Technica 120 and I hooked it up to my two two-foot bookshelf speakers and subwoofer.

Fittingly, I pulled out my copy of Neil Young's 3-LP Decade compilation, dusted it off, and gently put the needle on. Hearing depth in the sound as it bounced off the walls and wood floor, I believed I finally understood what Neil talked about. It was not like a revelation of the actual music, but a much better understanding of vinyl when it's played this way.

Ever since then, there has yet to be many days when I haven't listened to vinyl. Whether it's Scott Walker, Jawbox, or the Gaslight Anthem, I enjoy putting something on while I clean house or read a book. The experience of letting a record play through is a good one, leading me to hear stuff I had previously skipped over.

So, yes, Neil Young, you were right. It just took many years to agree with you. Now, about that Pono player.