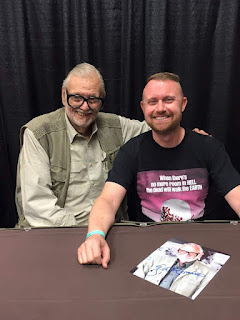 When it comes to wanting to meet people you admire, occasionally you get countered by these four words, "Never meet your heroes." Meaning, if you hold someone in high regards, you'll be disappointed if that person acts in a non-friendly way. And all those years of looking up to that person will vanish like tears in rain.

While I can understand that train of thought, I must stress these three words: MEET YOUR HEROES.

Yes, I have had unpleasant interactions with people I admire, whether through online, on the phone, or in person. But that number is incredibly small compared to the people that have been generous and kind with their time. With the ones who have been pricks, chances are very good I was not the only person he or she was a prick to. I prefer to not take things personally, focusing on the battle everyone has with themselves that has nothing to do with you.

Recently, I went to Texas Frightmare Weekend with Hope. She loves this gathering of horror fans and even interviewed its founder on her podcast. Without a doubt, her enthusiasm for it made me feel more comfortable at the thought of going to an event like this. We saw lots of people we've only seen in movies, like Robert Englund, Heather Langenkamp, and Adrienne King, from a distance. But if there was one person I would have liked to have met, it was George Romero.

Romero has made movies I have seen many times and I've always enjoyed what he has to say in interviews. Sure, he's made some of the best zombie movies of all time, but other movies of his, like The Crazies and Martin, had a pretty big impact on me, too. The price to get an autograph and picture with him was a little high to me at first, but with a line that was manageable (and moving at a steady pace), I figured, go for it.

Hope and I stood for about 30 minutes, talking to other people in line with anticipation. The rules were simple: pay in cash and there are no personalizations with your autograph. I picked an 8x10 for him to sign, paid my money, said hello, and shook his hand. I showed him the shirt I had on, which featured a riff on the iconic Dawn of the Dead poster with the words "Fuck Cancer" replacing "Dawn of the Dead." I asked if he had ever seen this shirt before and he laughed. He said he had not. He was jovial and friendly about it. Then I sat next to him and Hope took a couple of pics of us.

Coming away from the interaction, I'm happy I went through with it. Romero is 76 and still doing conventions, but like a lot of things in life, we shouldn't think that will always be the case. I'm glad I had the experience firsthand and have the documentation to prove it.

Why I suggest you meet your heroes comes from something Bruce Campbell wrote in his autobiography, If Chins Could Kill. No matter how many times people have told him they love his movies, he always appreciates when people take the time and say something nice to him. Expressing a nice sentiment goes a long way, no matter who you are.

Given how curious I am with musicians, filmmakers, and writers of all walks of life, I want to meet the ones I admire. If I have the chance to say something nice about how much that person's work has meant to me, then I want to take that chance.

And even with the few I've had not-so-pleasant experiences with, my appreciation of their work has not dwindled. I'd be a little hesitant to talk to that person again, though. If I never took the chance, how would I know what it would be like? I'd rather know than speculate.