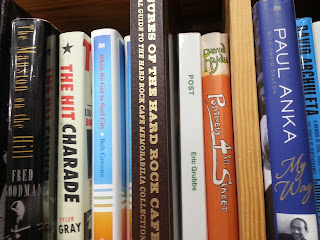 My first book, Post: A Look at the Influence of Post-Hardcore 1985-2007, came out in the late summer/early fall of 2008. Only two days ago, I found a copy of it in a bookstore. Granted, the store was Half Price Books, which sells mostly used books, but still, to see something I wrote be available for someone to discover and read was a wonderful sight. I had heard of copies available in stores here and there throughout the country. Now I had visual proof.

I didn't wonder if someone bought the book, hated it, and sold it. Since Half Price Books encourages their customers to sell back books they buy there and buy more, I figured that was the case.

Back when it was published, I paid a few hundred dollars to make the book listed as "returnable." The hope was, more bookstores would carry a returnable book. I never saw it in a bookstore as a new item. Never at an indie store or a Half Price Books. Barnes & Noble stores do not have large sections for music books, so I don't blame them for keeping their selections mainly with the biggest publishers.

I knew the book continued to sell over the years, and not just because I would look at the small quarterly royalty statements when I prepared my taxes. People would find me on social media and share a pic of their copy with me. I'd be asked to be on podcasts and we'd talk about Post and When We Were the Kids. No matter how small the numbers were, I was happy to see people reading what I had to say.

I can't help but kick in with more writer advice here. If your aim is to become a famous writer and never work a "straight" job ever again, I would not recommend writing a nonfiction book about a subgenre of music. That said, if you have a story/angle on a topic you want to tell that hasn't been done before, then seriously consider writing it. Don't think about getting famous or making some (or any) money. If you have a story to tell, then write it. Don't wait for someone to consider yourself a writer. Start writing.

Recently, I interviewed a best-selling author for one of the publications I write for. A handful of years ago, his fourth novel quickly caught a lot of buzz when a very famous author praised it and the movie rights sold in the millions. I asked him what his life was really like when his book became a best-seller. All that really changed was that he could afford to send his children to college, his wife didn't have to work to help financially support the family, and he focused on writing two more books. And he bought a summer house in the north east. But his day-to-day life didn't drastically change in terms of raising his children and being the best father and husband he can be. He had a happy life before the book sold like crazy, and he isn't banking on the royalties from his books for the rest of his life.

This author's books sell more in an hour than any of mine have ever sold, but I believe I came to an understanding in why people write books. It's not really for financial gain; it's the desire to tell a story, whether it's fiction or nonfiction. If I had never written my first book, I never would have started a blog. I probably would have not written for the publications I've written for. And I'm not sure I would have ever met Hope if it weren't for this blog.

Deep down, when I wrote my first book, I wished I would be interviewed for my perspective on post-hardcore/emo someday. That has happened quite a bit in the past seven years, and I'm happy that people believe in my research and my take on the genre. It's not for fame; it's to set the record straight.

Seeing my book in a store reminded me of this important idea as a writer (or really, anyone with creative drives): Do not put a time limit on success or lack of success. If you put everything into a six-month, five-year, or ten-year plan, you're prepping yourself for life going the way you think it's supposed to go rather than the way it will go. Enjoy the ride and the small victories. If you're lucky to have a book on the NY Times Bestseller List or make your primary income from writing, then great. But don't think not reaching those lofty heights means you're a failure. If you want to express yourself for the rest of your life, express it without thinking of any attention coming from it. Just express yourself. 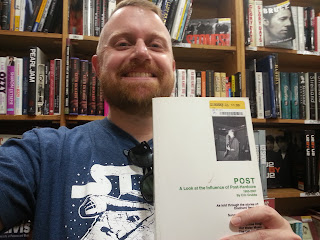