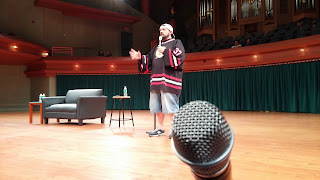 Prior to this past Saturday night, I didn't think I would ever ask Kevin Smith a question during one of his Q&A's. What kind of question hasn't been asked at his events for the past 22 years? Worse, if I thought I had a good question, I'd feel crestfallen if it had been answered thoroughly on a podcast I had not heard or an interview I had not read.

I had seen audience members boo questions in the first two An Evening With Kevin Smith DVDs. I had heard of people yelling "Summaries!" when someone asked about something that had already been answered many times before and didn't read the Summaries section of the now-defunct NewsAskew.com.

I tried to interview Kevin for the Observer, hoping to ask him questions that were more about his visits to North Texas rather than talk about his current TV, film, and podcast projects. I did get a response from his manager, but the trail went cold as Kevin was locked into filming an upcoming episode of The Flash. He's a busy dude, so I didn't take it personally that he wasn't available.

Going into the event at UNT's performing arts center, I kept thinking about a question I could ask and I thought of a potentially good one. I bounced it off of Hope, and she encouraged me to ask it. Not only did she do that, she said she would have no problem if I stepped on her foot or jumped over her to get up to the microphone when the Q&A began. I mentally mapped out a way to get up there, hoping to be near the front of the line. We were in the sixth row, and I figured there would be somebody who would be ahead of me.

After Jason Lee introduced Kevin and Kevin pointed out the two microphones on the ground level, people started to get up. I walked swiftly up and I found myself in the front of the line. This was unexpected. A handful of others were behind me and there was a handful of people at the other microphone. Kevin was on stage right, hovering above the other line, so I thought he would start with that line.

Well, he turned left and started with me. No pressure or anything, as the first question sets the tone of the night. If you have a shitty question or try to be a smarty pants or be really long-winded, it could make for a very long night.

After exchanging pleasantries and him mentioning my Star Wars shirt, I prefaced that I had a short and sweet question about his fabled comic book collection. The collection he sold to partially fund his first film, Clerks. That was the tease that interested me in Kevin's work on an episode of MTV's Week in Rock back in 1994. I had heard he bought most of the collection back when he received money from the sale of the movie to Miramax. The core of my question was, did he ever buy the rest of it back?

He responded with, "What a great question. Nobody's ever asked me that."

A warm feeling went through my body. It was a sense of relief. Basically, the answer was, he was unable to track down certain items that were very rare, especially figurines. Even with the help of higher-ups at DC Comics, they couldn't track them down. Kevin would go on and tell many tales related to his comic book collection, including meeting Walt Flanagan and going through Brett Ratner's copy of Action Comics #1, and it took almost an hour. I wasn't complaining, but I was aware of the guys behind me hoping to ask questions. I didn't want to hog all the time.

There was an interesting, impromptu moment during all of this. Kevin wanted to use a microphone stand. He could not seem to loosen it and raise it. I volunteered as I had spent many years doing this for my father's video production company, setting up stands and cameras for band and orchestra concerts. Maybe it was nerves, but I didn't pay attention to how high I put the stand. Kevin and I wound up trading it three times before he found a good height for it. It brought a lot of laughter and he shook my hand at the end of it.

As I stood there, I thought about telling Kevin about how Hope and I met through podcasting and writing, but I could not find the right spot. The moment had passed and he was ready to move on to the next person. Over a handful of other people got to ask questions before the 3.5 hour event was over. A couple got remarried with his officiating, a guy kicked a water bottle out of Kevin's hand to reprieve something he had done at a convention, and a surgeon shared funny stories about what it is like to work as a surgeon on the weekends and own a candy shop during the week. 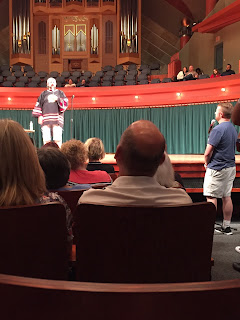 I came away from this thinking it was better than an interview or an autograph. I got to experience something special with Hope as one of our main sources of inspiration talked to people individually, but did it in a way where the audience was included in the conversation. I certainly will not forget this, and I sure as hell am happy I got to do this with Hope. There was so much more elation and enjoyment in seeing this with someone I love, who gets this. (We shared our stories on an episode of Fanboy Radio the night after.) If the Texas Theatre Q&A inspired us and brought us together, then the Q&A UNT inspired us even more. And with the journey of life with this wonderful woman, I'm very happy with where this has come to and where it's going.