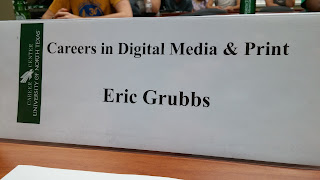 Last month, I was asked to be on a panel at UNT on careers in digital media and print. Meant as a way to give college freshmen an idea of what it is like to work in the field, the coordinators asked me and four other writers to share our stories.

I had a while to think about what all I wanted to share. The attitude I kept reminding myself was, encourage rather than discourage. I don't think I'm a discouraging person, but my cynicism can easily come out and it can sound discouraging. I ran through what I wanted to say, remembering what I have found to be helpful and not helpful.

I believe the panel went well, as me and my fellow panelists (two of which I have worked with at the Observer, one I've known at the Fort Worth Star-Telegram, and one at the Dallas Morning News) talked to a packed room, and we chatted with a few people who wanted to ask more questions afterwards. No one on the panel came off as bitter or angry. We acknowledged how writing in digital media is more about working with a platform rather than writing for a newspaper. We talked about numbers and analytics, as well as the need for content, but overall, we stressed that good writing and finding your own voice is most important.

I freely admit talking about this to a room full of strangers got me riled up. I couldn't help be overcome with emotion, wanting to stress how important it is to write. For the past 12 years, writing about what I cared about has saved me from a life of being a jaded, unsatisfied person. I couldn't help but think about those who choose to go down that route. Even now, well after the panel has been over, I think about people who have that attitude. I see it on an almost daily basis and want to stand up and say something.

There are writers who become so disenchanted with their experiences in trying to write for a living. They think it's necessary to save others from the grief in going down a similar path. They like to go on rants on Facebook and Twitter, thinking the best advice for aspiring writers is, "Don't."

Frankly, I hate that attitude. If I've learned anything about life, you have to try something. Holding yourself back from trying something that interests you only prevents you from new experiences. And new experiences are vital in living life. Write about what you know, but if you refuse to try new things, then what do you really know? What it's like to spend a lot of time alone in silence, wanting to punch your computer screen?

For the people who want to vomit all over other people's aspirations and dreams, you're simply in the way. You're a road block. People, if they're really determined, will find a way to get around a road block. Furthermore, you don't motivate by discouraging. You don't inspire people by being an asshole. Your bitter and angry attitude is a bunch of noise. A Metal Machine Music for those looking for a Pet Sounds. A puff of smoke that's temporarily in the way. You might take pleasure in being right if somebody decides writing as a career is not for him or her. But really, how can you feel better about your life that way?

I'm not trying to tell an aspiring writer he or she will write for the New York Times or receive a six-figure amount to write a book someday. It's hard to make a living as a writer. What I'm saying is, do something that you love. If you are ever fortunate to make a large sum of money because of your writing, then there is nothing wrong with that. But that should not be why you write. Write because you want to communicate, express yourself, and tell stories.

Beyond whether or not writing is for somebody as a career, the bigger lesson is how you want to present yourself in life. If being a repugnant Negative Nancy is your way of being "honest," well, don't be surprised when not a lot of people want to be around you, contact you, or like you. You can choose to give people helpful feedback, where you acknowledge what works and what doesn't. You're not leading people astray with unrealistic ideas. You're inviting people to believe in themselves.