The Best Team in the Land and All the World 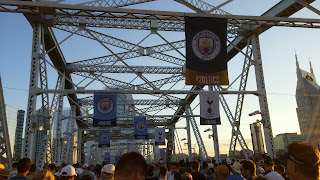 Rain during a Texas summer is rare, but there was so much of it in Houston in 2015 that the pitch was unplayable for a friendly between City and the Houston Dynamo. Joel and I found out the match had been cancelled right as we walked into the pub where a City meet-up was. Alas, City sent Mike Summerbee and Brian Kidd for a Q&A, gave us free drinks, and free merch.

I had debated flying to Manchester to see a match, but funds dictated that I should stay stateside. Plus, I had heard of another City trip to America halfway through the 2016/2017 Premier League season. I chose my summer vacation days accordingly.

When the club announced a trip to the United States in 2017, I knew I had to see at least one of the matches. I decided to see the Nashville match against Tottenham Hotspur over the LA and Houston matches.

Though there would be a lot of driving (10 hours to be exact), Hope and I would have more time to do things in town and City-related events. Seeing Nashville again would be very special, as when I went there two years ago to see a show, I drove back hoping I'd find a special someone someday. I'm lucky to say I did, and she's into City.

But before we left for the country music industry town, our City group Blue Moon Dallas had a special visitor.

Braydon Bent is an eight-year-old diehard City supporter. After winning a contest -- where he did his impression of Sergio Aguero celebrating the 93:20 goal against Queens Park Rangers -- the kid has become a viral sensation, often appearing in videos for the club. He was on a promotional tour throughout the southern region of the country, stopping at various points along the way. Bringing the captain's armband that Vincent Kompany would wear at the Nashville match, many of us BMD folks got to meet Braydon and pose with the armband. 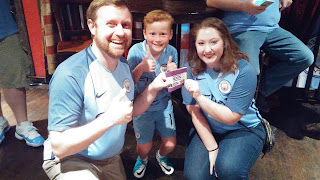 Braydon is a non-stop burst of positive energy. He has the kind of non-cynical, undying passion one can have for a professional sports team. He has charisma with people even though he's young. A joy to spend time with, and his father was a total gentleman, too. He mentioned to us that there was a welcoming sort of vibe once he walked into the pub we watch all of the Premier League matches. Further proof that Mark Mulv and his fellow co-founders have made something special.

After checking into our AirBNB and taking a moment to relax and have some dinner, Hope and I met up at a late-night party where MCFC Nashville meets. As we pulled up, a handful of Spurs supporters caught an Uber in the parking lot, leaving a pub filled with City supporters from around the world, drinking, eating, and singing City songs. I tried to save my voice for Saturday, but I sure had some fun singing chants from City's past. 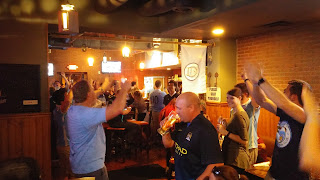 Saturday came. The sun was shining, vibes were good. Tottenham and City supporters were all over downtown near Nissan Stadium. Hope and I went to a City-related meet-up at the George Jones Museum, which is more sports bar than museum, and it was filled to the brim with people in sky blue, in addition to the country music tourists. We ran into Braydon and his father and they recognized us right away. Good times were had, but there was a match to see.

To save some money on parking and keep ourselves sane, we took a Lyft to the match. Our driver was a very enthusiastic man who knew the town extremely well, dropping us off at the stadium without having to sit in a very long line of cars. I had not been to a large American football field since the early 1990s, so to see the monstrosity that most NFL stadiums are these days caused me to step back and take in the awe of it.

Once we found our seats, I realized we were in for something extraordinary. 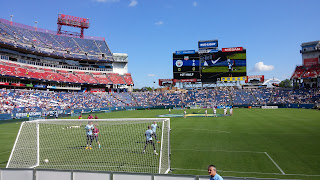 Sitting right behind the goal with many members of Blue Moon Dallas, and right in front of Joey McCune, the man who never runs out of banter or songs to sing, we knew we were going to have a good time, win, lose, or draw.

This area was designated for City supporters, as this was behind us. 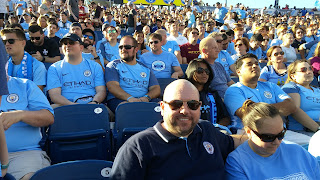 Yet what was standing right in front of us? 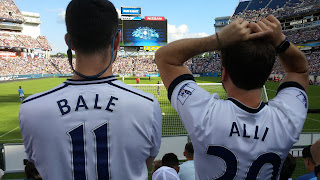 For some reason, almost every Spurs supporter I have come across is a bro. Meaning, beers in the Yeti cooler, constant high-fives, sports is life, and ALRIGHT, LIFE IS GOOD, BRO! While these guys (three in total) fit that stereotype, they had fun playing along with our banter and were surprised by our self-deprecating songs. Though they booed Kyle Walker (who recently transferred from Tottenham to Manchester City), we repeatedly sang, "He left 'cause you're shit/He left 'cause you're shit/Kyle Walker, he left 'cause you're shit." Seeing Walker lead the defensive attack, which frequently ran over the Spurs' offense, was nice to see.

A little over nine minutes in, we were about 20 feet away from John Stones knock a header into the Spurs' goal. The place was electric. Seeing players we've only seen on TV up close and personal was delightful. Seeing new keeper Ederson Moraes make some incredible saves, as well as an insane pass to Aguero, were some of the highlights.

City dominated Spurs, a club that is quite good and should do quite well in the Premier League this season. City seemed to build on the win they had over Real Madrid only a few nights before, making me think City has a really strong squad assembled for this new season. Anything can happen, so I'm not hedging my happiness in life based on rankings, trophies, or table positions. That said, it was nice to see City win in person. 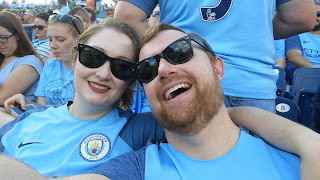 Football is my favorite sport to watch and play. There was a long stretch in time where it was not for me, but after finding the right club because of belonging with its supporters, I feel welcome. No, I never saw City play at Maine Road. No, I didn't see City get relegated after winning promotion. But with supporting teams in other sports fields that have had great times and terrible times during my 38 years on this earth, being a City supporter makes sense. 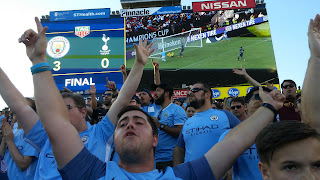 The end result of the match was a 3-0 victory for City. Even the Spurs fans in front of us shook our hands, thanking us for a good time. We went back to the George Jones for a drink and cooling off period. The weather was wonderful, and there was a breeze.

Slowly making our way from downtown, we caught a Lyft home and decided to get something to eat. Before we stepped into a Taco Bell for a late-night dinner, I realized Nicoletto's, an Italian food joint co-owned by Braid's Damon Atkinson, was across the street. We ate there instead, briefly talked to some Spurs supporters who were from Texas, and even met up with Damon. It was great to catch up and to introduce Hope to him. A nice post-script to the last time I was in town, to see Braid play at the Exit In. 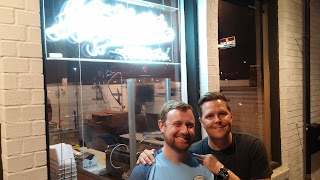 We got a lot done in that one day, and it was a day well-lived. We had a long day of driving ahead of us, so we got plenty of rest that night.

During the long stretch of endless trees, along with stops at gas stations and a Cracker Barrel breakfast, I was happy this all happened. International friendly matches are more advertising for the football clubs than anything else, but as a primer for the new season, it was wonderful.

Now to start plotting out a trip to Manchester.