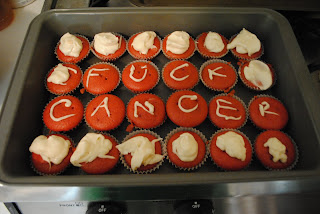 For every year a cancer survivor lives, it's another opportunity to say, "Fuck cancer." The same applies to anyone fighting it.

Sure, it's the not kind of stuff you'd say to your fellow parishioner in church, but there's nothing PC, pretty, or logical about cancer anyway. Hence why I had no problem making vegan red velvet cupcakes donning those ten letters for Diana's 27th birthday.

I had never made a vegan dessert by myself prior to last Sunday. I had found a recipe here and made sure I had all of the right ingredients. I didn't want to mess this up because I wasn't going to give myself the option to fail. If I screwed up, I'd start again. I wasn't about to buy pre-made cupcakes from the store.

My inspiration came from a post on Jean's excellent blog on her journey through chemo. Fellow mutual friends Keith and Stevie sent her those cupcakes and when I saw that picture of them, I had an idea. Since I wasn't about to ask any of the friendly ladies behind the Tom Thumb bakery counter to write those words on a dessert, I had to do this my way. Getting one of them to write "I Want Sprinkles" on a cake for Diana's birthday last year was hard (and weird) enough. (And yes, that's a reference to a classic post on Cake Wrecks.)

Since Diana's favorite color is red and one of her favorite yogurt flavors is red velvet cake, this was a no-brainer to consider making. Using the advice of putting the icing in a small plastic bag with a small cut in the bottom, I was able to write letters with white icing. At the end of the baking experience, after three hours (while having Cheap Trick's Budokan! and Dream Theater's Live at Budokan play in the background), I had over fifty mini cupcakes.

After almost two days in the fridge, these cupcakes were ready to be served for Diana's birthday. They were well-received and I would make them again in a heartbeat. So, here's to her birthday and many after.